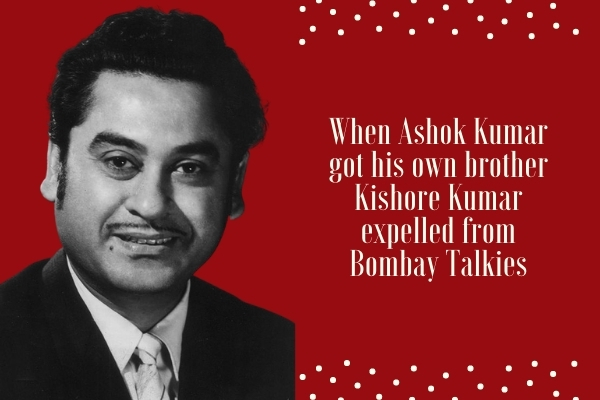 Ashok Kumar was born as Kumudlal Ganguly on 13 October 1911 in Bhagalpur. He started his law studies at Presidency College of the University of Calcutta, Kolkata but he failed in exams. He went to Bombay to stay with her sister who was till then was married to Sashadhar Mukherjee. Mukherjee was an important part of Bombay talkies which was owned by Himanshu Rai and his wife Devika Rani was the lead actress of the movies studio produced.

During the shooting of Jeevan Naiya in 1936 the male lead Najm-ul-Hassan eloped with his co-star Devika Rani. Rani eventually returned to his husband but Himanshu Rai did not allow Najm-ul-Hassan again to enter Bombay Talkies.

One day when Himanshu Rai saw Ashok Kumar, he was very impressed and decided that instead of Najam-ul-Hasan, he would complete Jeevan Naiya with Ashok Kumar. And thus Ashok Kumar’s film career started as an actor.

“Jeevan Naiya’ was released and proved as a superhit. So Ashok Kumar was the leading man in all the Bombay Talkies movies. He rose to stardom and everything was going fine but in 1940 Himanshu Rai died.

In 1945 Devika Rani got married again to the Russian painter Svetoslav Roerich and retired from the film industry. After Devika Rani’s departure, Ashok Kumar and Sashadhar Mukherjee again took up Bombay Talkies and tried to revive it producing films like Milan, Ziddi, Mahal, etc.

Ziddi and Mahal were special because these two movies gave some future superstars. Ziddi was a measure break for Dev Anand, Pran, and Kishore Kumar. Dev Anand and Pran were recognized as stars after this movie. Kishore Kumar got his first chance to sing a solo song for Dev Anand “Marne Ki Duayen Kyon Mangu”.

Kishore Kumar was the youngest of his four siblings and also the most naughty. His real name was Abhas Kumar Ganguly and he was born on 4th August 1929.

Kishore Kumar did not have much interest in studies and from childhood, he had a special fascination for music. He considered K. L. Saigal as his guru and tried to imitate him. He did not have any formal training in music.

Kishore Kumar initially sang mostly for himself or Dev Anand. Later it was Rajesh Khanna for whom Kishore Kumar sang a major chunk of songs.

Kishore Kumar sang a very few songs for Dilip Kumar, one of the most famous ones is ‘ Saala Mein To Sahab Ban gaya’. Can you believe that in his initial days, Manna Dey gave voice for Kishore Kumar?

Kumar was very particular about his fees and he even used to refer to fees as Tea.

In 1949 Kishore Kumar moved to Bombay and started working as a singer. He met his future Ruma Ghosh who was also a singer then. Soon both were in love and decided to marry. But this marriage was not acceptable to Kishore Kumar’s family, especially to Ashok Kumar because Kishore Kumar’s family belonged to a Brahmin family while Ruma’s family was Bengali Kayastha.

Kishore later divorced Ruma and then married Madhubala who just broke up with Dilip Kumar then.

He died on 13th October 1987 due to cardiac arrest. In the afternoon he suddenly felt pain in his chest and at 4.45 PM he died. His dead body was taken to his birthplace Khandwa, where his last rites were conducted.

He was just 58 years when he died. He has two sons from his first and last marriage. His elder son Amit Kumar is a playback singer and his younger son is Sumit Ganguly.