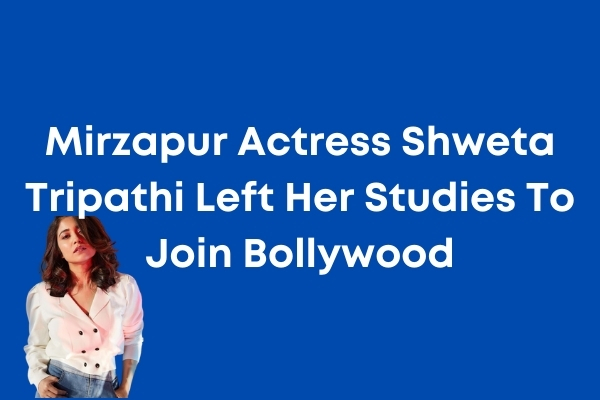 Shweta Tripathi is a well-known name now among Hindi film and web series lovers. She has made her mark with her performance and charm. Short height, Shweta has climbed a tall ladder to reach where she is today now. We would summarize her 10 years of journey in the Industry.

Hundreds of thousands of people come to Mumbai with the hope of making it big, but only a few are able to make a name for themselves. Shweta Tripathi, who played Golu in Mirzapur, has also worked hard to make a name for herself and has a long way to go.

Shweta Tripathi was born on 6 July 1985 in New Delhi. Her father is a retired IAS and her mother was a teacher. She used to perform in school dramas when studying in DPS.

Shweta Tripathi Left her Studies to become an actress

Shweta was a fashion student who wanted to be an actress in films. She decided to act while studying fashion at NIFT and moved to this city.

Shweta Tripathi recently wrote in a post about how her father stood by her in every situation and how she is only here today because of him. ‘One day I was on the terrace with my father and drying clothes,’ Shweta wrote, recalling that life-changing moment. That’s when I told my father I wanted to be an actor. My father immediately suggested that I attend the National School of Drama. At the time, I couldn’t say anything. I had no idea he’d agree so quickly. My father never misses an opportunity to surprise me and is always there for me in good and bad times. I’ve arrived here today because of him.’

When they hear the word “film industry” or “acting,” many parents advise their children to avoid it. Shweta was studying fashion at the same time, and as she neared the end of her studies, she decided to change her career. Her parents, on the other hand, fully supported her decision. Shweta debuted in the film industry in 2011 with the film ‘Trishna.’ Despite the fact that she rose to prominence as a result of the film ‘Masaan.’ In this film, she co-starred with Vicky Kaushal. Shweta became as well-known as Vicky Kaushal as a result of this film.

‘How important it was that I spoke to my father without hesitation,’ Shweta wrote in her post. Despite the fact that I had made this decision quickly, meeting him was a very special experience for me. He respected me, trusted me, and gave me the space I needed to make my mark. My father is responsible for everything I am today.

Shweta also stated that she was initially concerned about whether or not her parents would support her. ‘I was doing a fashion communication course and it was about to end when I realized that I had to go to films,’ Shweta wrote. I had to tell my father about everything, but I was worried that he would be upset because I had changed careers at the last minute, but my parents were supportive.

Both were dating each other for 5 years before marriage, and then both of them plan to take their relationship to another level.

Their love story began in flight eight years ago. ‘We had gone from Mumbai to Delhi for some work,’ Shweta explained in an interview. We didn’t talk on the way out, but we were seated next to each other on the way back. The flight was scheduled for 5 a.m. Our intention was to sleep, but we began talking instead.

Regarding the proposal by Chaitanya Sharma, Shweta said, ‘this proposal was very romantic. He proposed to me at a place named ‘Cuckoo Club’. This is a performing place in Mumbai. He wanted to propose me on stage because we had met in connection with a play like this. He told me he had a new play. When I went there, he proposed to me.’

Both got married on 29th June 2018 and her husband Chaitanya Sharma is 5 years younger than her.

Let us tell you that Shweta Tripathi recently realised one of her lifelong ambitions. She purchased her dream car, a Mercedes E-Class Exclusive E 220d. You’ll also be surprised by the price of this vehicle. This vehicle costs approximately 70.50 lakhs.