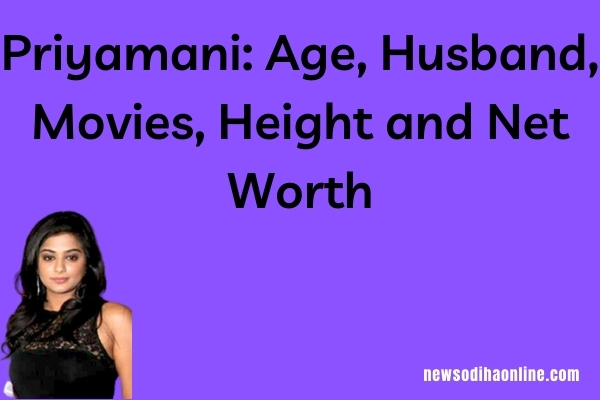 Priyamani is a well-known Indian model and actress who started her career in South Indian movies and mostly appeared in the South movies. She rose to prominence after appearing in films such as Evare Evare Atagaadu (2003) which was her debut movie and then in Otta Nanayam (200), Yamadonga (2007), and Thirakkatha (2008).

The majority of his films were commercially successful at the box office, propelling him to fame and offers for more projects.

Her web series Family Man 2 will release on 4th June 2021. She has shared the screen With Manoj Bajpai, Sharad Kelkar, and Samantha.

Priyamani’s full name is Priya Vasudev Mani Iyer and she was born on 4th June 1984 in Bangalore. She belongs to a Tamilian Iyer family. She was interested in modelling since her childhood and she appeared for brands like Kanchipuram, Erode, and Laxmi silk.

Her father, Vasudev Mani, is in the Plantation business, and her mother, Latha Mani, is an ex-national level badminton player and was a manager at Union Bank of India. Her elder brother Visakh is into their family business and helps their father.

Priyamani is a cousin of Bollywood star Vidya Balan. she is an animal lover and had been a part of PETA in past. She especially spoke against the abuse of dogs.

Also Read- Why Nargis Never wore a High heel till 1956

She has made a name for herself in the industry, and she is now one of the highest-paid actresses in the south.

She started her film career with the Telugu movie Evare Atagaadu in 2003, and the next year she appeared in Kangalal Kaidhu Sei, which marked her debut in Tamil movies.

In the same year, she also made her debut in the Malayalam movie Sathyam, an action thriller that proved a success.

Priyamani made her Hindi film debut in Mani Ratnam’s Raavan. It was a bilingual movie that was made in Hindi and Tamil. She played the character of Abhishek Bachchan’s sister Jamuni in the movie. The same year she also appeared in the movie Rakta Charitha-2 along with Vivek Oberoi and South actor Surya which Ram Gopal Verma directed.

She again appeared in an Item number for the movie Chennai Express in 2013 and the Item number was a huge success.

In 2019 she appeared in Family Man, a web series aired on Amazon Prime Video.

In 2007 she was awarded National Film Award for the Tamil movie Paruthiveeran. After winning the National award for the best actress, she said in an interview about getting stereotyped as she is offered similar kind of characters.

She is quite active on the social media app and posts regularly about her life, fashion, and upcoming projects. Take a look here.