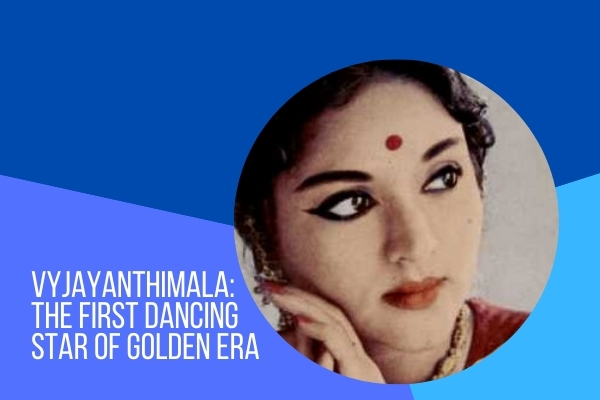 Vyjayanthimala is regarded as one of the most prominent actresses of the golden era and also one of the finest dancers of Hindi cinema. She once replaced Madhubala in Naya Daur and later in Ram Aur Shyam, she was replaced by Waheeda Rehman. The interesting fact is that in both the movies the lead actor was Dilip Kumar.

After leaving Ram and Shyam, there was a rift between Vyjayanthimala and Dilip Kumar for a long time, which was later resolved due to Saira Banu. Let us know about her life and film career from start to end.

She was born on 13th August 1936 in Triplicane a neighborhood of Chennai to M.D Ramaswamy and Vasundhara Devi. She was born in a Tamilian Brahmin family. Her mother Vasundhara Devi was a Tamil actress in the 1940s and she was only 16 years older than Vyjayanthi.

This 13th of August she will be celebrating her 86th birthday. She shares her birth date with another superstar from south Sri Devi who is also known as a dancing star.

Once M. V. Raman saw a dance performance of Vyjayanthimala and was heavily impressed. He wanted to cast her in AVM Production’s Vazhkai, so he contacted her family.

Her grandmother initially rejected the offer but Raman kept convincing her. Finally, she agreed and Vyjaynthimala started shooting for her first movie. Initially, Vyjayanthi kept it a secret and did not tell her friends that she is acting in the movie.

Vyjayanthimala remained active from the year 1949 to 1968, her first Tamil debut film was Vazhkai in 1949. The movie was a super hit and was one of the highest-grossing movies of Tamil movies in 1949.

After that, she acted in the Telugu film Jeevitham in 1950 which was a remake of her Tamil movie. She learned Telugu from her father for her first Telugu movies.

Later she came to Hindi cinema, and she made her debut in the Hindi film Bahar in 1951 which was a remake of her Tamil movie Vazhkai.

Vyjayanthimala was selected for the Best Supporting Actress award for the film by Filmfare. But Vyjayanthimala refused to accept this award saying that her character is not a supporting actress and both she and Suchitra Sen are the lead actresses of this film.

Due to this, there was some estrangement between Vyjayanthimala and Filmfare, and for the next 2 years, she was not even nominated in any category.

The second film of Dilip Kumar and Vyjayanthimala was Naya Daur directed by BR Chopra which was released on August 15, 1957. Madhubala was initially the leading lady in this film, but due to the rift between BR Chopra and Madhubala’s father, Madhubala left the film.

The film was the second biggest hit of 1957 after Mother India ( ₹80 million INR) and collected 54 million INR.

The very next year i.e. 1958, Dilip Kumar and Vyjayanthimala’s film Madhumati was released which was one of the biggest hits of that year.

The year 1958 was a memorable year for Vyjayanthimala. Where her film Madhumati was a superhit, her second film Sadhna also proved to be a very good hit. Sunil Dutt was in the male lead role in Sadhana. For the first time, Vyjayanthimala received the Filmfare Award in the Best Actress category for this film.

Dilip Kumar and Vyjayanthimala appeared together again in 1959 and the film was Paigam. For the first time in this movie, Dilip Kumar and Raaj Kumar were seen together and after that, they appeared on screen for the second time after almost 35 years in Saudagar.

Vyjayanthimala in her autobiography has denied any love affair between her and Dilip Kumar.

Raj Kapoor was previously in a relationship with Nargis who later got married to Sunil Dutt.

Raj Kapoor was, in fact, married and had children. When Raj Kapoor’s wife Krishna learned of his affair with Vyjayanthi, she went to a hotel in Bombay with her children.

She stayed at Mumbai’s Natraj Hotel for about four and a half months.

But in his autobiography, Vyjayanthimala has denied any romantic relationship with Raj Kapoor.

Vyjayanthi got busy with her films after being separated from Raj Kapoor, and in the meantime, she developed pneumonia. Chamanlal Bali, the doctor who treated her was also one of her most loyal fans. Vyjayanthimala and Doctor Bali fell in love during their treatment. Both of them married on March 10, 1968, and they had a son named Suchindra Bali.