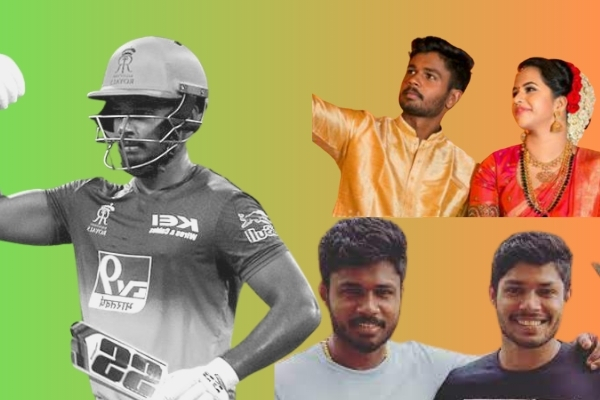 The performance declined after Rajasthan Royals performed well in their first few matches and Rajasthan Royals were at the bottom of the table by the end of the 2020 IPL. RR only manage to win 6 matches out of their 14 matches.

As a result, RR did not qualify for playoffs in IPL 2020. Sanju dedicates a lot of his success to Rahul Dravid who guided him and gave him opportunities.

Sanju’s father, Vishwanath, was a constable in Delhi Police, and for this reason, Sanju did his early education in Delhi. After some time, his family shifted to Kerala, and from there, Sanju studied his high school and degree college. At the age of 11, he was selected in Kerala Under-13 and started his career by scoring a century.

Because of Sanju’s performance, he was also made the Under 16 and Under 19 state cricket team captain. Sanju Samson scored an unbeaten 200 off 138 balls in a match against Goa, playing with the Under Sixteen team.

Given his performance, he was also included in India’s Under-19 World Cup where he was the highest run-scorer for India.

Sanju Samson, who made his Ranji debut in 2011, was made the captain of the Kerala Ranji team in 2015 and became the youngest captain in the Ranji Trophy history. Sanju Samson was in superb form during the 2016-17 Ranji season. In Ranji Trophy’s season, he scored 627 runs in 7 matches and became the highest run-scorer.

He was then made the captain of the Board President’s XI team against Sri Lanka where once again he performed brilliantly with the bat. In the 2019-20 Vijay Hazare Trophy, Sanju Samson played an innings of 222 runs from 129 balls against Goa. This is the highest score made by any wicket-keeper batsman in List A cricket.

He was included in his team by Kolkata Knight Riders in 2012, but he did not get a chance to play a single match for KKR in this season of IPL. Then in 2013, Rajasthan Royals signed Sanju Samson to their team, and on 14 April 2013, they played their first IPL match against Kings XI Punjab, in which they impressed everyone with their batting and wicket keeping.

In the next match, he was promoted against the team of Royal Challengers Bangalore and he took full advantage of this opportunity to win the team by scoring 63 runs off 41 balls. He was also awarded the title of man of the match for this innings.

In the year 2016, Sanju Samson joined the Delhi Daredevils team. After this, in the IPL auction of 2018, Rajasthan Royals added him to their team after spending a hefty amount of eight crores. Mumbai Indians were also interested in him and bade up to 7.80 crores.

In 2014, Sanju Samson was selected in the Indian team for five ODIs and one T20 match against England. But he did not get a chance to play a single match. After this, he made his debut in the series against Zimbabwe in the year 2015.

As of 2022, Sanju Samson’s net worth is estimated at around $8 Million or 60 crore Rupees. Most of his income comes from playing for India, IPL, and brand endorsement.

Sanju Samson was retained by his team Rajasthan Royals Rs 14 crores along with Jos Buttler, Yashasvi Jaiswal and most probably he will lead the team.

In his debut season for the Rajasthan Royals, Sanju Samson made an impression with his gritty knocks. Rahul Dravid developed the Kerala wicketkeeper-batsman into a strong campaigner. In 2016, he followed his mentor into the Delhi Daredevils (now Delhi Capitals) side, where he played some key innings over the course of two seasons before returning to the Rajasthan Royals.