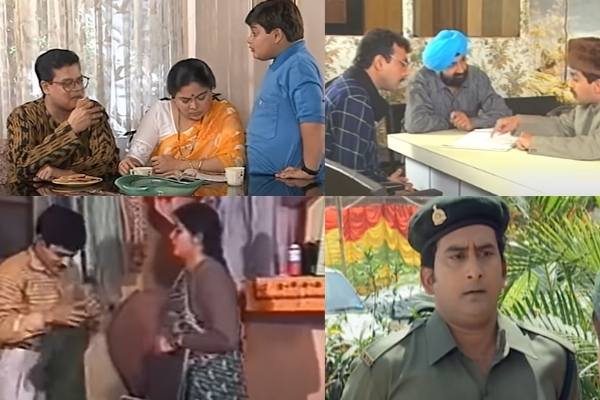 If you are fed up watching today’s serial and missing some spark in it, you should definitely watch these Eight old comedy serials in Hindi from the old days or often considered the golden era of Door Darshan. It will make you laugh, and the best thing about these is you can watch these serials with your family without shying away at some scenes. There are no double meaning lines nor there is extra drama induced in it. The serials were kept simple but still, they are masterpieces.

The Sitcom started in 1986 on Door Darshan National and ran for 100 episodes. Every evening, a group of urban youth struggling to make a living in an increasingly difficult socioeconomic environment gather on a nearby street corner to share their stories and experiences.

Many of the characters in this serial became very famous, one of which was the character of Drunkard, played by Sameer Kakkar.

The flop show directed by Jaspal Bhatti started in 1989 was a satirical comedy show that is relevant even today. Through this show, Jaspal Bhatti had shown many serious issues in a comic style, which people liked very much.

This serial was such a hit that even today people jokingly say to each other that “Mungerilal ke Hasin Sapne” when someone tell about his big dreams.

Mungerilal is a low-level clerk who is ruled by both his wife at home and his boss at work. To make matters worse, Mungerilal’s father-in-law adds salt to Mungerilal’s wounds by exaggerating his own accomplishments as a police officer. Mungerilal overcomes all of this by daydreaming about his boss, his father-in-law, and exacting revenge. Mungerilal is also dating one of his lovely coworkers. His wife wakes him up to ruin his dream as he basks in the glory of his achievements.

Three generations of the Diwan family, along with their servant, live in their ancestral home in Mumbai’s suburbs. When they deal with relationship and business issues, they often find themselves in amusing circumstances.

The show was produced by Jaya Bachchan and the executive producer was Amitabh Bachchan Corporation Limited or ABCL and directed by Anand Mahendroo.

Engineer Mohan Bharti is a Hindi teacher at the National Institute of Language. His students come from all over India and the world to study with him. They are all from various professions. And he is continuously correcting their pronunciation and comprehension of Hindi words.

Rajeev Mahara directed this serial of 106 episodes. The lead actors of this comedy serial in Hindi were Pankaj Kapoor, Shubha Khote, Tom Altar, Viju Khote, Vivek Vaswani, Javed Jaffrey and Moon Moon Sen. The serial started airing on DD National in 1993, and by 1998 the serial ran.

Amravati Ki Kathayein is an Indian anthology television series based on Satyam Sankaramanchi’s Telugu short stories collection “Amaravati Kathalu.” It was directed by Shyam Benegal, produced by Venugopal K Thakker and broadcast on Doordarshan, India’s national broadcaster. This serial, which aired in the mid-90s, was just 13 episodes. Its story is based on Amravati, a small village in Andhra Pradesh, which is on the banks of the Krishna River.

Both Keshav Kulkarni and Dilruba are neighbours and also married. Keshab Kulkarni’s wife Koki is a housewife, while Dilruba’s wife Prema Shalini is a film actress. Both Keshav Kulkarni and Dilruba try to impress each other’s wives but always fail. This serial of 143 episodes was directed by Rajan Waghdhare and produced by Adhikari Brothers. From 1994 to 1998, comedy serials in Hindi was aired on DD National.

This is the only comedy serial in Hindi in this list that was not aired on DD National, but it was aired on SAB TV, which later became Sony SAB TV. The serial, which started in 2001, was directed by Prakash Mera and starred Pankaj Kapoor, Manoj Pahwa, Deven Bhaujhani, Ashavari Joshi, Sanjay Mishra, Hemant Pandey and Eva Grover in the lead roles.

Mussaddi Lal is a common Indian who goes to different government offices due to his work and how government officials exploit him. This story is shown in this serial in a comic form. This serial was a big hit, due to which it was reintroduced as Naya Office Office in 2007 and in 2011, the film titled Chala Musaddi Office Office was also released.

If you are free this weekend and want to see something that will entertain you along with being light-hearted, then these eight old comedy serials in Hindi can definitely be tried. None of these serials will disappoint you and will be up to your expectations. It also brings nostalgia refreshing the old memories of childhood.