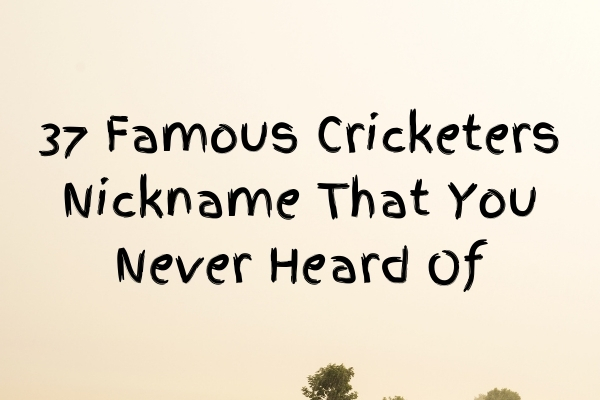 Cricketers are loved by fans and sometimes referred to by a nickname due to some reason. These 38 famous cricketers nicknames are very famous with their fans and the cricketing world. They are many times informally addressed by these names.

I will tell you who was ODI revolutionist, Pigeon, Smudge, father of cricket, Pup or Mad Max.

1. Sherry – Navjot Singh Sidhu– Sherry is wine, and someone once gave it to Navjot Sidhu’s father. As a result, his father named him Sherry.

2. Wall- Rahul Dravid– He was named as wall as he batted like wall and saved matches when India needed most. He is also called Jammy by teammates and fans.

3. Mr. Cricket- Michael Hussey– This all started in England when Hussey was playing County Cricket. He was in action against Lancashire alongside former England captain Andrew Flintoff and fellow countryman Brad Hogg. After watching Hussey playing in the extreme weather conditions without caring about the weather which was cold and wet, Flintoff remarked that he had never seen anyone who loved cricket more than Hussey and dubbed him “Mr. Cricket.” When Brad Hogg returned to Australia, he spread the name among his teammates, and the rest is history.

5. Haryana Hurricane-Kapil Dev– Was from Haryana and one of the real fast bowlers for India who made an impression in international cricket.

6. Universal boss-Chris Gayle– Christopher Henry Gayle, widely regarded as one of the most celebrated cricketers of all time, continues to perform admirably. He is the highest run-scorer in T20.

7. White lightening-Allan Donald– Because he was lightning fast and used to apply a zinc cream on his nose on lips which looked white. This was the reason why Allan Donald was called while lightening.

8. Mad Max- Glenn Maxwell– For his hitting ability from ball 1, and once he starts hitting, then it is hard to stop him. He plays almost all kinds of short, which any batsman would not try even in the dream. He even sometimes plays reverse sweep from the bill one and has often succeeded in hitting maximum with the sweep shot.

9. ODI revolutionist- Arjuna Ranatunga – He changed how ODIs are played, especially in the 1996 World cup. No one expected Sri Lanka to win the world cup. He reformed the team, and Sri Lanka started the trend of attack in the first 15 overs.

10. Little Master- Sunil Gavaskar/ Sachin Tendulkar – both are seen as batting greats and short in height. That is why they were named little masters.

12. Punter- Ricky Ponting– Ricky Ponting used to bet on dog races in the early 1990s and that’s is why Shane Warne named him Punter. In the Australian language, Punter means someone who bets on a horse or dogs race.

13. Captain cool-Mahendra Singh Dhoni – Being cool on the field he has been named as Captain Club.

14. Jumbo- Anil Kumble– During a match Navjot Singh Sidhu called him Jumbo Jet as a ball bowled by him took off, later the jet was dropped and was only named as Jumbo.

18. Hitman-Rohit Sharma– Due to his ability to hit sixes at ease and to any bowler. He is also the only batsman in history to score 3 double centuries in ODIs.

19. Swing king- Wasim Akram– Akram was one of the bowlers who could swing the ball at will and that was why called swing king.

20. Pup- Michael Clarke– He was the youngest of the 11 when he joined the Australian cricket team. Pup means little in the Australian dictionary. it is a short form of a puppy.

21. Potato / Aloo- Injamam Ul Haq ( It was only referred by Indian fans/ not referred in the cricketing circle)

22. Turbunator- Harbhajan Singh– He was named after the 2001 Australia- India series where he took 30+ wickets in the series.

23. Rawalpindi Express- Shoaib Akhtar- Regarded as the fastest bowler of history and he belonged to Rawalpindi in Pakistan.

24. Sunny- Sunil Gavaskar – This was the short form of his name.

26. Freddy- Andrew Flintoff– He was named so by John Stanworth, the captain of Lancashire’s second XI because his name was similar to Fred Flinstone, a cartoon character of the sitcom The Flintstones.

27. Gabbar- Shikhar Dhawan – In a domestic match when two batsmen were batting for hours, Sikhar Dhawan went near them and recited the famous dialogue of Gabbar from Sholay “Bahut yarana lagta hai,” and everyone burst into laughter. Then on his teammates started calling him Gabbar.

29. Cheeku- Virat Kohli -His childhood friends called him Cheeku due to his hair like a cartoon character.

32 Whispering Death-Michael Holding – Due to his sheer pace and the ability to bowl bouncers.

35 Chef- Mathew Hayden – He is a qualified chef and even has written a book regarding recipes and cooking.

36 Binga-Brett lee– He has a chain of electronics showrooms called Binga Lee.