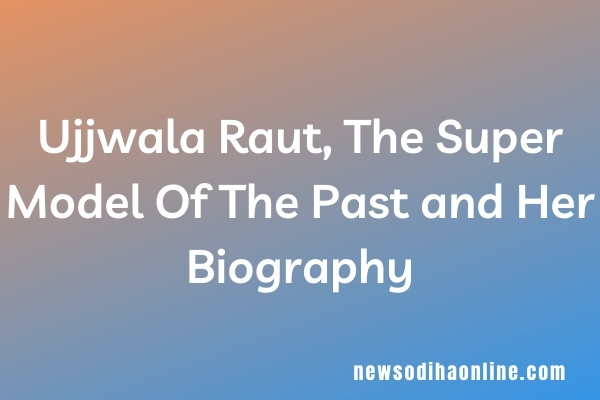 Today is Ujjwala Raut’s 43rd birthday, considered as one of the first few supermodels along with Madu Sapre, Mehr Jessia, Feroze Gujral, Manpreet Brar, etc. Ujjwala was born in Mumbai on June 11, 1978. Ujjwala is known for her daring yet beautiful fashion sense. She is one of India’s first female supermodels, and she has made a name for herself not only on a national but also on an international scale.

She has appeared for prestigious brands like Ungaro, Cavalli, Gucci and Paul Smith, etc. She is well-known in the fashion worlds of New York and France. Ujjwala, who was born into a middle-class family in Mumbai’s Dahisar neighbourhood, is also well-known for her personal life and remained in the limelight due to a divorce case filed against her non-Indian husband.

Contents hide
1 A brief summary
2 Ujjwala Raut Marriage, Husband and Divorce
3 Kingfisher calendar hunt
4 Fight With Malaika Arora
5 Family
6 Ujjwala Personal Info
7 FAQs
7.1 Is Ujjwala Raut Maharashtrian?
7.2 What is the age of Ujjwala Raut?
7.3 Is Sonali Raut from Odisha?
7.4 Who is the supermodel of India?

At the age of 17, Ujjwala was named Femina Look of the Year. In addition, Ujjwala placed in the top 15 of the Elite Model Look Contest held in France in 1996. Ujjwala wanted to be a model since she was a child, so she began auditioning in college and was also chosen.

Ujjwala Raut is India’s most successful supermodel, and she is one of the few Asian models who is well-known in the fashion worlds of Paris and New York. In 2012, Ujjwala co-hosted the Kingfisher Calendar Hunt with model Milind Soman. Aside from that, Ujjwala has appeared on the covers of numerous magazines, including Elle, Time, and Lofficiel.

Ujjwala has modeled for a number of well-known companies. Ujjwala is also the first Indian woman to walk Victoria’s Secret runway for the famous lingerie and intimate wear brand Victoria’s Secret. On the other hand, when it came to personal matters, Ujjwala was in the headlines due to her catfight with Malaika Arora, a former supermodel, VJ, and ex-wife of Arbaz Khan.

Ujjwala Raut got married to and the mother of a single daughter Ksha. Ujjwala, on the other hand, is divorced from her husband, Maxwell Sterry. Both got married on June 19th 2004, in New York hosted by David Bowie at his apartment. Ujjwala has also appeared on the cover of Vogue magazine, Cosmopolitan, Harper’s Bazaar and Marie Claire magazine.

The Couple met in Paris in 2001 during a fashion show as her husband Maxwell Sterry was also working as a model. Ujjwala was 16 years younger than her husband, but still, both fell in love. Both got married in 2004 and got settled in Goa. Her husband got POI as he was married to an Indian. In 2006 Ujjwala gave birth to a beautiful girl child, and they named her Ksha.

Things turned ugly in 2008 when the couple started fighting with each other and blamed each other for the differences. things fell apart quickly as the fights grew, and even both complained to police about the fights.

In 2011, Ujjwala’s ex-husband, while giving an interview to the Daily Mail, said that he had been deported from India in just 72 hours due to her complaint. He also alleged that Ujjwala had used her influence to force him to leave India and distanced her from his daughter, whom he had brought up as Ujjwala mostly stayed outside for her work.

In the same year (2011) both got divorced legally.

She was one of the judges for the Kingfisher calendar hunt-2012, held in 2011, and Sonam Kapoor, Milind Suman, and Atul Kasbekar. The audition was conducted in Mumbai, and the final photoshoot was conducted in Sri Lanka. The finalist were Tina Desai, Angela Jonsson, Maia Haydon, Mimi Blix, Saiyami Kher, and Nathalia Kaur.

Despite this, she has been in the spotlight numerous times. There was a time when Ujjwala and Malaika appeared on the same show together, and there was a schism between the two. The schism was caused by Arbaaz. Despite the fact that Arbaaz and Malaika had separated at the time, Malaika did not like anything at all.

In fact, Ujjwala and Malaika Arora were both seen in the show ‘Super Model of the Year’ telecasted on MTV. Aside from Malaika, the show’s judges included supermodel and actor Milind Soman and Neena Gupta’s daughter and designer Masaba Gupta. Simultaneously, Ujjwala appeared in the show as a mentor.

Arbaaz Khan was the catalyst for both of their catfights. Malaika was irritated by Arbaaz and Ujjwala’s Instagram flirting, which caused a schism between the two. At the same time, Malaika stated that Ujjwala used to tell the crew members about her and Arbaaz’s conversation, which she despised.

Her father worked as Deputy Commissioner of Police in Mumbai police (now retired) and her mother is a housewife.

Her younger sister Sonali Raut is also a model and actress. Sonali won the Kingfisher calendar assignment as a model in 2010. She has also appeared in movies, web series and music videos. She also took part in the reality show Bigg Boss.

Ujjwala currently resides in New York, USA and continuing her modelling there. Her daughter also lives with her as she is raising her as a single mother. Many times she posts pictures or videos on her Instagram account photographed by her daughter.

Yes, she is a Maharashtrian and precisely a Maratha.

What is the age of Ujjwala Raut?

Is Sonali Raut from Odisha?

No, she is from Maharashtra and a Maratha.

Who is the supermodel of India?

There has been few but Ujjwala Raut is the first Indian supermodel who achieved so much success in abroad. She has walked twice for Victoria Secrets.