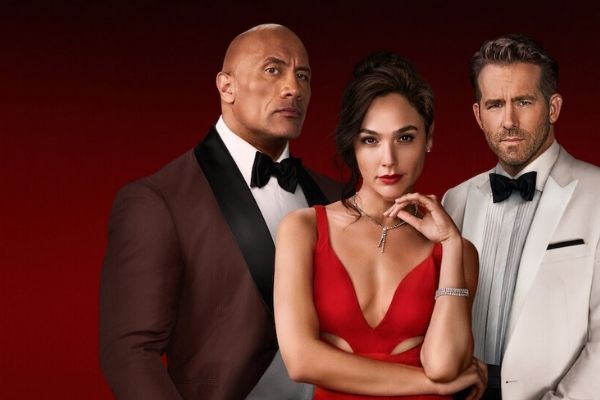 Red Notice stars Dwayne Johnson, Gal Gadot, and Ryan Reynolds in an action-comedy heist film. We caught up with Dwayne Johnson and Gal Gadot on an early morning video call last week to discuss their chemistry in the film, what makes Dwayne dance like a “freaking ballerina” (in Gal’s words), and who they would choose to partner for a real-life robbery. Red Notice is now available on Netflix.

A large budget? Yes, that as well. Is the payout, however, comparable with the scope and scope of the production?

Unfortunately, the answer is no. Red Notice, which is now available on Netflix, has glistening decorations but swims in shallow, sluggish waters in terms of substance.

The problem with chasing superficial thrills like the ones Red Notice packs into its two hours is that no matter how big the film looks or how energized the main actors (Dwayne Johnson, Ryan Reynolds, and Gal Gadot) is, the waves it creates are as powerful as small soap bubbles. They’re gone before they’ve even started to float!

Red Notice swivels on a precariously shaky axis that can barely carry its own weight, let alone the strain of what wants to be a star-studded blockbuster, despite the breathtaking settings and locations and visual flair (thanks to cinematographer Marcus Forderer).

The most costly film ever to be streamed on Netflix, the action-adventure comedy is raunchy, even diverting in places, but it never rises above its superficial sheen and gloss. Art heists and con artists are central to the plot. But forget about the art; even Red Notice’s artifice borders on the labored.

From ancient Egyptian artifacts of unknown provenance to Nazi-era loot hidden in a faraway jungle, from an action sequence in a cavernous hideout beneath a bull ring to an escape from a high-security Russian prison, from a heist in a museum in Rome to a robbery in a vault room in Valencia, Red Notice jumps from one set piece to the next without ever finding a cohesive core sturdy enough to hold it together.

Red Notice, written and directed by Rawson Marshall Thurber, is about an FBI agent and two art thieves who are trying to outwit each other. Rome, Bali, London, Russia, Cairo, Argentina: the trio goes from one location to the next in search of one other – and of a precious item of art said to have gone missing for decades.

One twist leads to another, then another (and then… it’s time to stop counting) in a shamelessly pulpy plot that never settles into a consistent rhythm. It’s only fitting that Red Notice begins inside Rome’s cylindrical Castel Sant’Angelo: the rest of the film revolves around a flimsy concept.

Johnson’s character enters the circular building with Interpol’s Inspector Urvashi Das (Ritu Arya) to prevent the theft of a valuable object d’art stored within. The operation does not produce the expected outcome. It takes them all on a wild goose chase across continents, including the thief and the cop.

Special Agent John Hartley (Johnson, working with Thurber for the third time after Central Intelligence and Skyscraper) is on the trail of wanted thief Nolan Booth (Reynolds). The two men square off right away. A foot chase through the museum galleries and the streets of Rome begins when Hartley, aided by a fizzy drink, demonstrates that the feared theft has actually occurred.