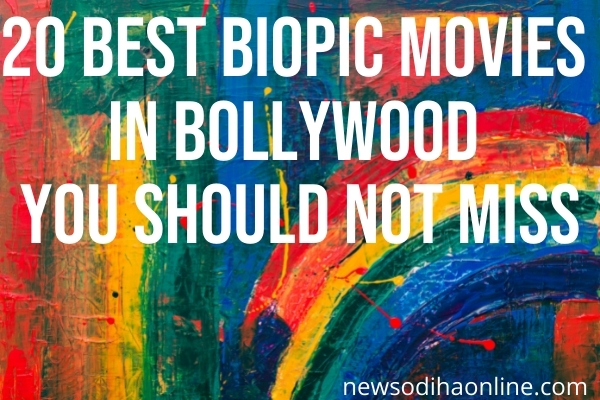 Today, we will discuss the 20 best biopic movies in Bollywood that you should not miss as you can get entertainment, insights, and learn from their lives.

Olympic Bronze medalist and one of the best badminton players globally, Saina Nehwal, is an inspiration to many and especially to girls who want to achieve heights in sports. She has won more than 24 international titles in her career.

Released in 2021 movie “Saina” focuses on the life journey of Saina Nehwal. The main character is played by Pareeniti Chopra.

Released in 2013, Bhaag Milkha Bhaag is based on the life of India’s finest runner Milkha Singh, who faced many obstacles in his life to become the best athlete in India. In this movie, Milkha Singh’s character was played by Farhan Akhtar and the direction of this movie was given by Rakyesh Omprakash Mehra.

The film MS Dhoni The Untold Story, based on Mahendra Singh Dhoni, considered one of the best captains in the world and India, was released in 2016, starring late Sushant Singh Rajput. This story features Mahendra Singh Dhoni’s early life to winning the 2011 Cricket World Cup.

Mery Kom, released in 2014, is based on the life of Indian boxer Mery Kom. Mary Kom is counted among the best women boxers of India who have got India medals in the Olympics. Apart from the Olympics, she has also won medals in competitions like World Championship, Asian Games, Commonwealth Games, etc. In this movie, Priyanka Chopra played the role of Mary Kom with perfection.

Though they never claimed it as a biopic, the movie’s story was heavily influenced by the life of Silk Smitha. Silk Smitha, who appeared mainly in South Indian movies as a dancer or small characters, saw many ups and downs in her life but was reluctant to compromise with her attitude. Ace actress Vidya Balan played the Silk character.

The film, released in 2018, is based on Sanju Dutt’s life. This movie spreads light at many unseen and unheard aspects of his life. The movie covered Sanjay Dutt’s relationship with his mother and father also. Ranbir Kapoor played Sanjay Dutt’s character in the movie.

The movie, released in 2019, is based on the life of Balasaheb Thackeray, the eminent and first chief of the Shiv Sena. The story of this movie is based on Balasaheb’s early life to his last days. Nawazuddin Siddiqui was seen in the lead role who played the character of Bala Saheb Thackrey.

Released in 2020, the movie focuses on the life journey of PM Narendra Modi. from being an ordinary boy to CM of Gujrat and finally the Prime Minister of India. Vivek Oberoi played the character of Narendra Modi in the movie.

Set to release this year, the movie is based on the life of former actress and Chief Minister of Tamilnadu, J. Jayalalitha, who was fondly called Thalaivi and Amma by her fans and supporters. Kangana Ranaut plays the J. Jayalalitha character.

There has been biopics before and after this movie focused on Shaheed Bhagat Singh’s life but this was by far the best one considering the emotions and acting.

Released in 2004, the movie is based on India’s greatest freedom fighter, Netaji Subhas Chandra Bose. Sachin Khedekar played the character of Netaji.

The man who started the 1857 Soldier’s revolt was Mangal Pandey. The 1857 revolt was also considered the first fight for freedom in Indian history. Released in 2005, the movie is based on the life of Mangal Pandey. Aamir Khan played the character of mangal Pandey.

Released in 2000, the movie focuses on the life of Shaheed Udham Singh, who took revenge for the Jalianawal Bagh massacre in then British India. The movie featured Raj Babbar, Juhi Chawla, Gurdas Mann, Shatrughan Sinha, and Amrish Puri.

The movie is based on the life of Anand Kumar, a mathematician from Patna, who is famous for teaching poor kids so that they can qualify for IIT. The movie release in 2019, and Hritik Roshan played the character of Anand Kumar. You can watch the full movie on Hotstar.

Neerja Bhanot was a flight attendant and model. in 1986, she died saving passengers of her flight hijacked at Jinnah International airport in Pakistan. She was awarded Ashok Chakra by the Indian government and Tamgha-e-Insaaniyat award (civilian award for bravery) from the Pakistan government. The movie is based on her life, struggle after marriage, and the hijack. Sonam Kapoor played the character of Neerja Bhanot.

An army man, a national athlete who won several medals for the country, turned rebel due to the situation he faced back home after taking VRS from the army. Pan Singh Tomar is a real-life story of its kind, and Irrfan Khan’s performance won him a national award for this role. If you have not watched this biopic movie, then watch it, and I guarantee you that you will not get bored for a second.

Released in 2004, the movie focuses on the life and struggle of Phoolan Devi, known as the Bandit Queen of India. Seema Viswas played the Phoolan Devi character, and it also features actors like Manoj Bajpai and Nirmal Pandey.

So these are the 20 Best Biopic Movies In Bollywood that you should watch. if you have not watched these movies then go and watch them over the internet as most of them are available at one or another OTT.