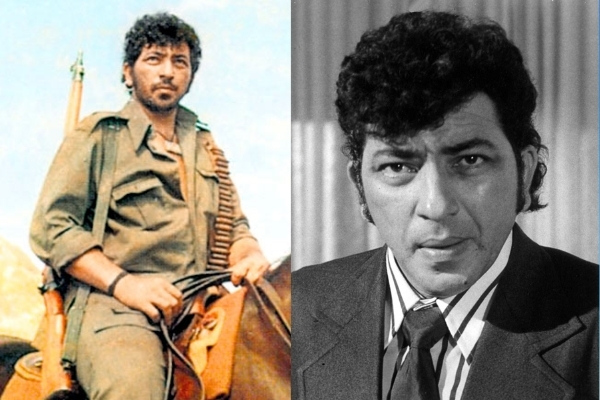 We often recognize an actor based on the character he plays rather than his real name. Amjad Khan, a well-known actor, is in the same boat. Fans all over the world still refer to him as ‘Gabbar Singh.’ Amjad Khan was born in Lahore on November 12, 1943.

We often recognize an actor based on the character he plays rather than his real name. Amjad Khan, a well-known actor, is in the same boat. Fans all over the world still refer to him as ‘Gabbar Singh.’ Amjad Khan was born in Lahore on November 12, 1943.

Amjad Khan made his film debut as a child actor in the 1951 film Nazneen. At the time of the film, he was only 17 years old.

Few people are aware that Amjad Khan was also an accomplished actor. According to his son Shadab Khan, Amjad was a top Persian student at Mumbai University. Before doing ‘Sholay,’ he was on his way to becoming a journalist. He also spent some time working for a news agency. Amjad Khan spoke Hindi, Urdu, and Persian fluently.

Read-Vinod Khanna: Who left his family and Career in search of Spiritualty

Was not the first choice for Sholay

Amjad Khan was not the first choice to play Gabbar Singh in the film Sholay. Danny, an actor, was approached first for the role. However, because Danny was filming Feroz Khan’s ‘Dharmatma’ at the time, he refused to do ‘Sholay.’

Amjad Khan made his film debut in 1973 with the film Hindustan Ki Kasam. But he learned his true identity from the film ‘Sholay.’ Amjad Khan, according to those close to him, enjoyed drinking tea. He drank up to thirty cups of tea per day, and he found it difficult to work when he didn’t have tea.

Amjad Khan was working on ‘The Great Gambler’ with Amitabh Bachchan when an accident occurred. The film was to be shot in Goa, and Amjad Khan had traveled there with his family for that purpose, but on the way, Amjad Khan’s car was involved in a terrible accident in which Amjad Khan was seriously injured.

The accident severely injured Amjad Khan. Amjad Khan spent a long time in a wheelchair as a result of this accident. They had to have surgery. Meanwhile, Amitabh Bachchan has been extremely helpful to Amjad Khan and his family.

Amjad Khan’s bad phase appeared to have just begun based on what happened in the accident. Amjad Khan began to gain weight from this point on. Amjad Khan placed a high value on physical fitness. Amjad Khan used to play badminton and exercise every day before the accident, but everything came to a halt after the accident.

Amjad Khan’s health deteriorated so much as a result of his increasing weight that he fell into a coma. He, too, came out of it after a while. On July 27, 1992, Amjad Khan died of a heart attack.