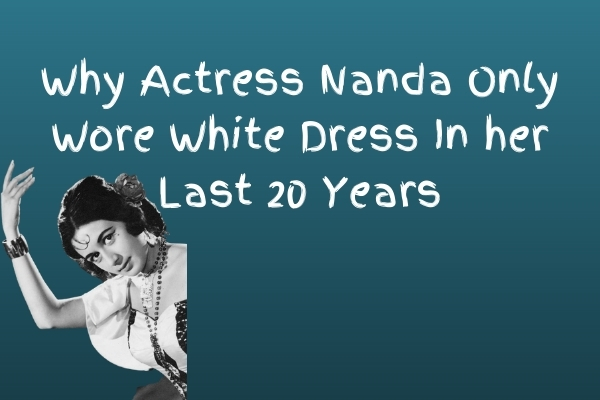 Actress Nanda was born on 8 January 1939 in Maharashtra. Nanda’s father, Vinayak Damodar Karnataki, was a successful actor and director of Marathi films. Baburao Pendharkar and Bhalji Pendharkar were Nanda’s paternal uncle and her father’s half brothers.

Nanda belonged to a film family still her life has been a roller coaster ride. Establishing herself in the film industry was not as easy as many would think.

Nanda was a gorgeous and wonderful actress of her era. She started working in films at the age of just eight.

When Nanda returned from school one day, her father told her that she has to shoot for the film he was making. For this, she has to cut her hair as the character demanded (it was a boy character). Actress Nanda did not want to do the role as she loved her hair.

But later on, with the persuasion of her mother, Meenaxi, Nanda agreed. Nanda’s hair was cut short like boys for the shoot. The name of this film was ‘Mandir.’ The director of the film was Nanda’s father, but unfortunately, Nanda’s father passed away before the film was completed.

Apart from her, she had six more siblings, and the monetary condition of the family was not that good. She discontinued her studies. Though she later hired a private teacher to continue her studies at home.

The entire responsibility of the house fell on Nanda’s shoulders. Under compulsion, she decided to act in films. She made the simplicity and innocence of her face the strength of her acting. She also started working on radio and stage.

At the age of ten, Nanda became a good heroine of Marathi cinema. Nanda was awarded a special award by former Prime Minister Jawaharlal Nehru for the film ‘Kuldevata’ directed by Dinkar Patil.

Nanda not only worked in Marathi films but also in Gujarati films. She acted in about eight Gujarati films and also in Hindi movies as a child artist. Her screen name in childhood movies was “Baby Nanda”.

Then in 1956, in her maternal uncle V Shanta Ram’s Hindi film ‘Toofan Aur Diya‘ with Rajendra Kumar. In 1959, Nanda played the role of ‘s blind sister in the film ‘Chhoti Behen‘ with Balraj Sahani and Rehman.

The song ” Bhaiya Mere rakhi Ke Bandhan Ko Nibhana” was one of the superhit songs in the movie which even today we listen to every time Raksha Bandhan arrives.

The audience very much liked her acting and looks. Nanda had worked in hit films like ‘Jab-Jab Phool Khile,’ ‘Gumnaam‘ and ‘Prem Rog.’

She was so much liked in the sister character that her fans used to send her Rakhis on Raksha Bandhan.

Her film ‘Dhool Ka Phool‘ with Rajendra Kumar was a super hit in 1959. This film took Nanda to the heights of stardom. In the 1960s she became one of the highest-paid actresses in Hindi Cinema.

She had done the highest movies opposite Sashi Kapoor who used to call her fondly her favorite actress. Both acted in 8 movies and five movies were hit among those.

She also acted with then superstar Rajesh Khanna in “The Train” and “Joru Ka Ghulam“.

Talking about personal life, Manmohan Desai was deeply in love with Nanda but the very shy Nanda never gave Manmohan a chance to express his love. Later Manmohan Desai married someone else. After Manmohan’s marriage, Nanda was lost in the darkness of loneliness and oblivion. Manmohan also got busy in his married life but after some time his wife passed away.

After this Manmohan again came close to Nanda. During that time Nanda was 52 years old. In 1992, 53-year-old Nanda got engaged to Manmohan. Manmohan Desai proposed to her during a dinner party arranged by Waheeda Rehman. But fate probably had something else in mind.

Nanda’s mother suffered from cancer due to which she used to stay with her and take her care of. Desai made a movie named “Anmol” which was a box office disaster. Due to the movie, he suffered heavy losses and even lost all of his money.

He even slipped into depression and started drinking heavily.

Manmohan Desai died in an accident one year after the engagement. Manmohan Desai fell from his balcony and was seriously injured. He was rushed to the hospitals where doctors declared him dead-on-arrival. The two could never be united and Nanda remained unmarried.

It is said that whenever Nanda used to go out, she used to go in a white sari or dress because she considered Manmohan Desai as her husband. Nanda was left quite alone after his death. He even stopped talking to people. Nanda, who was living the life of loneliness, said goodbye to the world in 2014.

In her last days, she only used to meet her contemporaries whom she considered as her friends. Likes of Helen, Waheeda Rehman, Sadhna, Saira Banu, Tabassum used to visit her.

At the age of 75, she died due to a massive heart attack. Her maid found her lying outside the bathroom and was rushed to the hospital. But doctors were unable to save her. She was cremated at the Oshiwara crematorium in Jogeshwari West, according to Hindu rituals.