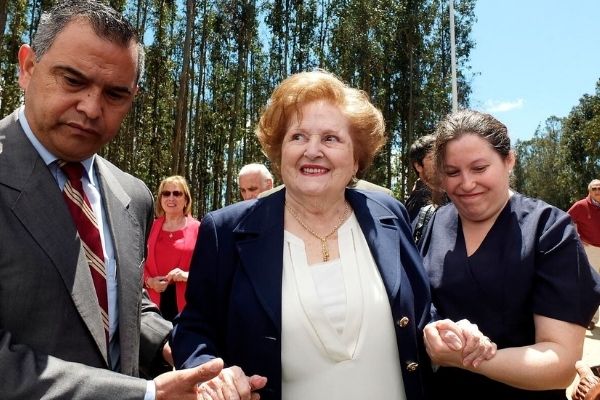 Doa Luca, as she was affectionately known, was regarded as a remarkable “political strategist “: throughout the dictatorship, Lucia Hiriart acted in her shadow by utilizing her immense powers.

Lucia Hiriart, the widow of Chilean general Augusto Pinochet, author of the 1973 revolution in Chile against then-President Salvador Allende, died at the age of 99.

Karina Pinochet, her granddaughter, reported her grandmother’s death in Santiago de Chile on Twitter: “My dear grandmother died at the age of 99, surrounded by family and loved ones. She has left an indelible impact on our hearts. She dedicated her life to the service of Chileans and history. She will understand how to properly honour his amazing work and work for our dear country “.. The 99-year-old, who had been ill for a long time, had been hospitalized numerous times in recent months due to recurrent respiratory difficulties.

Read- Fearing a new variant of the coronavirus, cryptocurrencies make a surprising comeback at the end of the month

Contents hide
1 People are celebrating
2 Lucia Hiriart, a strategist in the shadow of the dictatorship, who was she?

Lucia Hiriart, a strategist in the shadow of the dictatorship, who was she?

Lucia Hiriart, born on December 10, 1922, in Antofagasta, Chile, has always been regarded as a “lady of iron,” a character who functioned in the shadows and wielded immense authority throughout Pinochet’s dictatorship, between 1973 and 1990. Approximately 3,200 people vanished into thin air during that dark period, including numerous Italians.

Doa Lucia, as she liked to be called, had chosen to keep a low profile since her husband’s death on 10 March 2006, partly due to judicial problems involving family assets and the management of Centers for Mothers (CEMA), a network of institutions Pinochet refused to leave despite having to hand over power to the democratically elected president, Patricio Aylwin, in March 1990.

Her last public appearance was in April 2020, on the occasion of the death of Sergio Onofre Jarpa, the dictatorship’s former interior minister. In an unauthorized biography titled ‘Doa Luca,’ published in 2013, journalist Alejandra Matus described her as a “political strategist, of power in the shadows,” all the more so after Pinochet himself acknowledged that she was one of the people who had most influenced his decision to lead the coup against President Salvador Allende.

Lucia, Augusto, Verónica, Marco Antonio, and Jacqueline were born from the marriage of Lucia and Pinochet, who married in 1943.