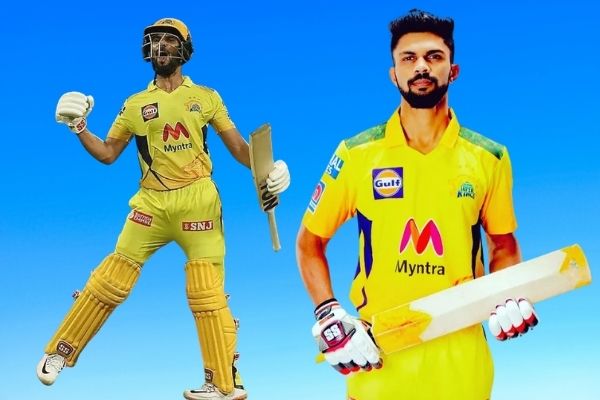 Ruturaj Gaikwad is a talented Indian cricketer known for his exciting and risk-free game and has been added to the recently announced Indian team for the home series against New Zealand. In today’s modern cricket, this type of game is most popular; it is common for cricketers who play fearlessly to gain popularity quickly.

Ruturaj Gaikwad is not a miracle child, an IPL sensation, or a social media celebrity, but rather a player who has shone through his hard work and ability.

Ruturaj was rumored to be dating Marathi actress Sayali Sanjeev but he denied this.

The Indian cricket team has received many good players from the IPL, including many big names like Hardik Pandya, but there are many players who come from their domestic cricket, one of whom is Rituraj Gaikwad. From the start, tell us about this great player’s personal life and career.

Rituraj Gaikwad’s name may be unfamiliar to you, but it is not unfamiliar to cricket analysts. In the last three to four years, this player has emerged in the eyes of everyone and is attracting everyone’s attention with his batting.

Rituraj is a right-handed opener who bats in the style of Indian cricket legend Rohit Sharma. He is the same player who led his home team to the most runs in the 2018-19 Syed Mushtaq Ali Trophy.

The family of Ruturaj Gaikwad

His father works as a Defense Research and Development Officer, and his mother is a teacher in a municipal school. Rituraj grew up in a joint family with several cousins, none of whom were interested in sports. Despite this, Rituraj’s family has played an important role in shaping him into the player he is today.

Rituraj began playing leather ball cricket when he was five years old. Rituraj went to see a match between New Zealand and Australia at the Pune Nehru Stadium in 2003, and when he saw Brendon McCullum hit an Australian bowler with a scoop shot, it inspired him a lot.

Every player requires proper guidance in order to improve, which is why Rituraj joined the Pune Vengsarkar Cricket Academy at the age of 11. As a result of his good cricket, he quickly joined the Maharashtra Under-14 and Under-16 teams.

During his under-19 years, he drew a lot of attention from the public. Ruturaj became the second player to score the most runs in the Cooch Behar Trophy in 2014-15. In six matches, he scored 826 runs, including three centuries and one half-century.

He also scored a triple century in the following tournament, and as a result of his consistent performances, he was named to the India Under-19 team for the 2016 Under-19 Cricket World Cup.

Ruturaj Gaikwad’s performance in the World Cup was unexceptional, but he did not give up and proved himself once more in domestic cricket. In the Cooch Behar Trophy, he scored 875 runs in 7 matches, including four centuries and three half-centuries.

Ruturaj made his first-class debut for the Maharashtra Ranji team in 2016-17 at the age of 19. His Ranji career was cut short when he sustained an injury during a match, necessitating surgery and forcing him to miss the rest of the Ranji season.

After an 8-week layoff, Rituraj returned to the field in the Vijay Hazare Trophy, where he played only one match. Rituraj was named his team’s starter the following season.

This young player scored his first List-A century, scoring 132 runs in 110 balls against the Himachal Pradesh team. Rituraj then became a regular member of the Maharashtra team.

The 2018-19 domestic season was crucial for Rituraj, as his performances in both the Ranji and Vijay Hazare Trophy earned him a spot on the India A team. Rituraj scored 456 runs in 11 Ranji Trophy matches and 365 runs in the Vijay Hazare Trophy.

Ruturaj scored a century for the Board President’s XI against the England Lions in 2019. After this performance, he was named to the India-A team for the first time in June 2019 for a one-day series against Sri Lanka-A.

Rituraj demonstrated his abilities by hitting an unbeaten 187 * runs in 136 balls in his first match and 125 * not out in his second match, proving his selectors correct.

Despite outstanding performances against Sri Lanka, Rituraj Gaikwad was not initially named for India-tour A’s of the West Indies, but luck always favors Bahadur, and so did Rituraj.

Due to an injury, Prithvi Shaw was forced to miss the team’s first tour of the Caribbean, and Rituraj took his place.

Rituraj’s domestic cricketing journey in 2018-19 was very good, and as a result of his domestic cricket performance, Rituraj was purchased by Chennai Super Kings for the IPL 2019 for a base price of Rs 20 lakhs. Despite the fact that he did not play a single game during the tournament, Rituraj did not complain about sharing the dressing room with legends such as MS Dhoni, Suresh Raina, Shane Watson, and Faf du Plessis for nearly two months.

His IPL 2020 team, Chennai Super Kings, retained faith in him and included him in their lineup.