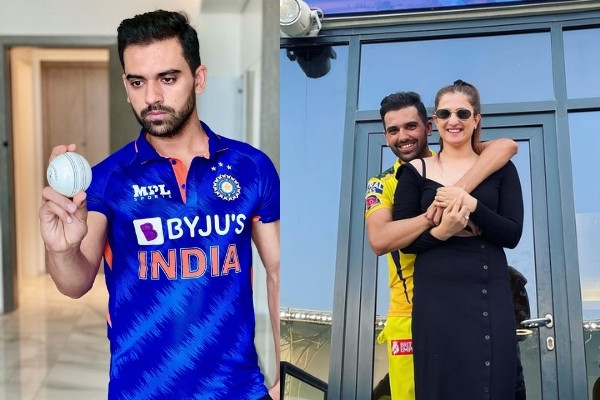 Deepak Chahar’s name is making headlines in the cricket world right now as he has been added to the team for the home series against New Zealand. He had done work in his first match that no other Indian or international bowler would have done. Deepak Chahar is a rising star in India’s cricket team.

He has played in a number of matches for Rajasthan and has consistently put in his best effort. As a result, Deepak Chahar has also been fed in T20. Today, in this article, we will tell you about Deepak Chahar’s life. We will tell you everything that happened in Deepak’s life that every cricket fan should know.

Read- Rishabh Pant Life, Career and Girlfriend. The Story Of The Struggle Behind The Smiling Face

Deepak Chahar was born in Agra but now lives in Suratgarh, Ganganagar, Rajasthan. He began his studies in Suratgarh. He began playing cricket as a child, and his father wished for him to become a good cricketer.

Read- Venkatesh Iyer: all Rounder In All Field, Biography

According to him, he was unable to pay attention to his son, which is why he quit his job and inspired Deepak to focus on cricket, driving him 50 kilometers from Suratgarh to Hanumangarh Cricket Academy to learn the game. Deepak’s coach, Navendu Tyagi, taught him the intricacies of cricket.

Chahar played his first match for Jaipur against Hyderabad, bowling for the first time. He took 8 wickets in 7.3 overs, giving Hyderabad 10 runs, and bundled out Hyderabad for 21 runs. Deepak Chahar’s achievement earned him a spot on the Rajasthan Royals IPL team in 2011, and he has continued to play in the IPL ever since. From 2011 to 2015, he was a member of the Rajasthan Royals.

How he got into Dhoni’s Chennai team

Everyone has begun to like Deepak Chahar as a result of his good performance; perhaps this is why Rising Pune Supergiants were also a part of Dhoni’s team. He was a member of Mahendra Singh Dhoni’s team from 2016 to 2017, after which he was purchased by Chennai Super Kings for Rs 80 lakh in 2018. Deepak Chahar had his best season for the Chennai Super Kings in 2019, taking 22 wickets at an average of 21.90 in 17 IPL matches.

Deepak Chahar made his international debut in a T20 match against England, where he performed admirably. This game took place on July 8, 2018. In his first international match, however, he only managed to take one wicket after four overs. As a result, his performance was not significantly improved. India, on the other hand, won this match thanks to Rohit Sharma.

Deepak Chahar made his international ODI debut against Afghanistan, where he failed to impress with his bowling. He took one wicket and scored 37 runs. Deepak was chastised for taking only one wicket and conceding 37 runs in four overs. This match, however, was also a tie between India and Afghanistan.

Deepak Chahar has some interesting facts.

Some Deepak Chahar-related facts that you should be aware of, and if you are a cricket fan, you will undoubtedly learn something from Deepak Chahar’s life, so read these fascinating facts carefully.

Deepak Chahar demonstrated his bowling prowess by taking 8 wickets in his first match for the Indian team. Deepak was able to win the hearts of the people even before his first match.

Deepak Chahar is the first successful cricketer from the district of Sri Ganganagar.

Deepak Chahar’s cricket career has had many ups and downs, and he has been injured several times.

Deepak was once told by a big cricketer that he would never be successful in cricket, but he has shown success in other areas of his life.

Deepak Chahar joined the Rajasthan Royals (home matches) when he was 18 years old.

Deepak Chahar is not the first member of his family to play for the Indian cricket team; his cousin Rahul Chahar is also a member of the team.

Deepak Chahar’s father, Lokendra Chahar, was a member of the Indian Air Force before leaving to help his son succeed in cricket. Deepak will never forget his self-sacrifice.

Deepak has always been in the news for his fast bowling; he tries his hardest to do his best in every match, and he has also taken many important wickets.

Chahar, according to Mahendra Singh Dhoni, can compete with the best batsman with his bowling.

Deepak Chahar took 6/7 in the T20 International match against Bangladesh, and his hat-trick here has given him recognition once again in India, where he had previously failed to demonstrate his bowling skills. However, by bowling a hat-trick, he has demonstrated that he is a good and successful bowler.

Tell us how you felt about these aspects of Deepak Chahar’s life, and if you have any additional information about him, please share it with us. We will try to include the information you provided in Chahar’s biography.