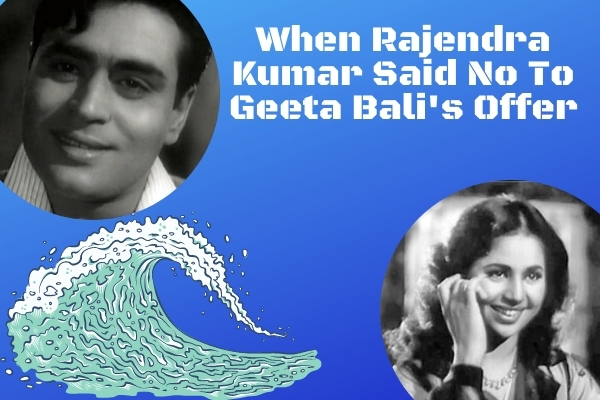 Rajendra Kumar, who won people’s hearts with his best performance in Bollywood, ruled the film industry for nearly four decades. Rajendra Kumar was regarded as one of the best actors of the 1960s.

Up to the early 1960s, the Hindi cinema was ruled by Raj-Dev-Dilip known as ‘Trimurti’. But in 1960 Hindi cinema saw some new and fresh faces like Sunil Dutt, Raaj Kumar, Dharmendra, and Rajendra Kumar. The most interesting thing about the Sunil-Raaj-Rajendra was the trio was part of Mehboob Khan’s ambitious project ‘Mother India’.

At a certain point in Rajendra Kumar’s career, six to seven of his films were in theaters at the same time.

Rajendra Kumar was born on 20 July 1927 in Sialkot (Now in Pakistan). His father Sh. Lubhaya Ram was in the textile business in Karachi but at the time of India- Pakistan partition in 1947 Kumar’s family left all of their property and migrated to Bombay.

Though he was keen to join Hindi cinema but not in front of the camera rather behind the camera. He started his career as an assistant to H. S. Rawail. But destiny had different plans for him.

Every big heroine in Bollywood at the time wanted to work with him. Even when Rajendra Kumar was married, Bollywood ladies flocked to him.

Rajendra Kumar debuted in Hindi cinema with the film ‘Patanga,’ in 1949 in a small role. But he made his first appearance as a hero in ‘Vachan’ released in 1955.

In fact, Geeta Bali is regarded as a great actress in Hindi cinema. She has given many hit films in her career and was married to actor Shammi Kapoor in real life in 1955. Both got married secretly during the shooting of ‘Rangeen Raaten’ at a temple in Bombay.

She had appeared in a number of films prior to ‘Vachan.’ Despite the fact that her performance in this film was well received. Not only that but she was nominated for a Filmfare Award for Best Actress for this film.

In this film, she played Rajendra Kumar’s elder sister. Rajendra Kumar played his character in this film with such intensity that he began to think of Geeta as his sister. But he never conveyed his feelings to Geeta Bali.

Geeta Bali became an actress and producer after starring in ‘Vachan.’ And she was producing a movie after the success of Vachan.

She wanted to cast Rajendra Kumar opposite her in one of her films, but the actor declined her offer. Geeta Bali was offering him a good role and money in her production. So he called Kumar to know the reason for his refusal.

Rajendra Kumar stated that because he considers her to be a sister at heart, he is unable to romance her on screen.

From 1963 to 1966, all of the films were box office smashes. According to reports, only Rajendra Kumar’s films were shown in every cinema hall at the time, and all films celebrated the Silver Jubilee. As a result, Rajendra Kumar became known as ‘Jubilee Kumar.’

His measure breakthrough was the role of Nargis’s son in Mother India alongside Sunil Dutt who also was a new actor then. Rajendra Kumar appeared in 83 movies.

It is said that Rajendra Kumar’s stardom began to fade as soon as Rajesh Khanna entered the film industry. He shifted to character roles in the mid-1970s.

Rajendra Kumar’s financial situation had deteriorated to a critical level by 1969. Rajesh Khanna even bought his bungalow from him for a sum of 3.5 lakhs. At the time, this bungalow was known as ‘Dimple’ which was named after Rajendra Kumar’s daughter.

People say Rajendra Kumar wept bitterly the night he left the bungalow. Rajendra Kumar did not permit Rajesh Khanna to keep the name as it is and Khanna changed the Bungalow name to ‘Ashirwad’.

After his death in 2012, his family sold the bungalow for 90 crores.

Rajendra Kumar also directed the film for his son Kumar Gaurav. ‘Love Story’ in which he also played the character of his father.

Rajendra Kumar’s last two years were a nightmare of low hemoglobin levels, blood transfusions, and hospitalizations. He was treated in the United States for ten months. Even as his body deteriorated, his mind remained sharp; he had weekly box-office collections faxed to him so he could stay up to date on industry news. Rajendra Kumar passed away on July 12, 1999.