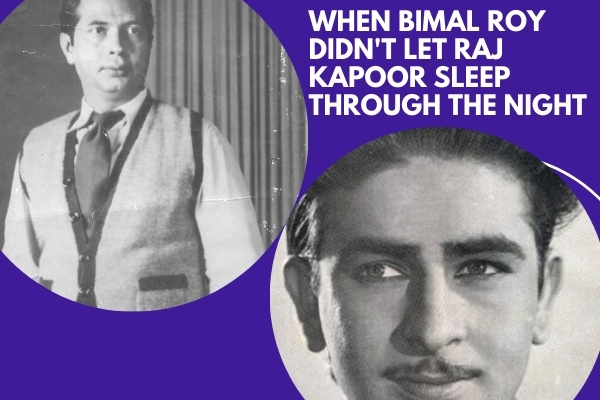 Bimal Roy is considered one the finest director of Indian cinema. Bimal Roy not only made realistic movies but also nourished directors and actors for next-generation like Hrishikesh Mukherjee, Asit Sen, Gulzar, etc.

His film ‘Madhumati’ won nine Filmfare Awards in 1958. For 37 years, this record remained in his name. The record was broken by ‘Dilwale Dulhania Le Jayenge‘ released in 1995. Bimal Roy died in 1965, at the age of 55, after succumbing to cancer.

Bimal Roy was born on July 12th, 1909 in Suapur, Dhaka (then in East Bengal, British India). He came from a landlord family. Following his father’s untimely death, a family feud erupted at his home, forcing him to be evicted from the landlordship. After finishing his studies, he went to Calcutta to work on some films. The fact that Madhubala regretted not working on Bimal Roy’s film hints at his popularity.

At the start of his career, he assisted P.C Barua as a Cinematographer who made the ‘Devdas’ in 1935. P.C Barua was in the lead role in the Bengali version of Devdas which was later dubbed in Tamil. The Hindi version was made with K.L Saigal in the lead role.

Do Bigha Zamin By Bimol Roy

The movie featured Balraj Sahani, Nirupa Roy, Nazir Hussain, and Meena Kumari in the lead roles. The story was about a debt-ridden farmer whose land is grabbed by the landlord. To save his land he migrates to Calcutta city and becomes a rickshaw puller.

But in the end, he could not save his land and the land was auctioned to a mill owner who built a mill on the land. It shows the struggle of farmers and also the illiterate people who used to suffer at the hand of greedy landlords.

This film is not only a fantastic film about farming, but it is also holy scripture for the actors. It was also well-received on a global scale, winning numerous awards.

Why Raj Kapoor did not sleep

Raj Kapoor also took acting as his profession from an early age. But Raj Kapoor was different from the batch of actors who were his contemporaries like Dilip Kumar or Dev Anand.

Dilip Kumar and Dev Anand focused on their acting career while Raj Kapoor was into acting and direction. Raj Kapoor’s directorial debut was the 1948 movie ‘Aag’ opposite Nargis.

Raj Kapoor’s movies were doing fair business at Box Office but they were all traditional Hindi Masala movies with regular stories of love with heroes, heroine, and melodious songs.

Raj Kapoor also reached the movie theater “Do Bigha Zamin” with his wife Krishna Kapoor. Watched the entire film silently and during this time he did not talk to his wife. Seeing that he was sitting silently in the car while returning, his wife felt that maybe Raj Kapoor did not like the film.

Raj Kapoor kept changing sides the whole night that day but could not sleep. The next day seeing him in such a state, his wife asked him what happened.

Raj Kapoor answered her, “Why couldn’t I make this film? What kind of movies I am making?”

If a list of the 100 best Indian films is created in the next thousand years, this film will undoubtedly be included. Inspired by “Do Bigha Zamin”, Raj Kapoor produced and directed a movie called “Jagte Raho” in 1956. He was in the lead role while Nargis played a cameo role.

Though the movie did average business in India but was a blockbuster in the Soviet Union as Raj Kapoor was a known and popular face because of his previous movies.