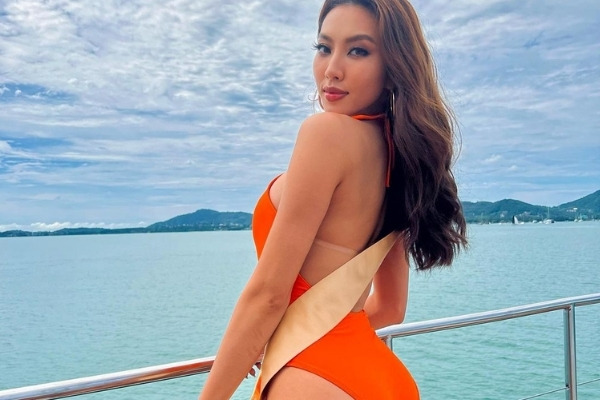 Thuy Tien wins Miss Grand 2021 Title from Vietnam. Her full name is Nguyễn Thúc Thuỳ Tiên and the winner was chosen by a tiebreaker due to a tie between Ecuador and Vietnam.

Thuy Tien from Vietnam stands 1.70 meters tall and has sexy measurements of 32-24.5-36. She was named in the top 5 of Miss Vietnam 2018 with the noble title of Beauty of Kindness. She has a razor-sharp face, sexy lips, and a sizzling body. She was also deemed suitable for the Miss Grand International criteria.

Thuy Tien is a multi-talented girl who used to be an MC at a number of big events, including the red carpet semi-finals and finals of Miss Vietnam 2020. This 23-year-old girl’s other abilities, such as singing, dancing, and cat walking, are on par with the Vietnamese representatives who “won” the previous Miss Grand International 2021 competition in January.

The final of Miss Grand International 2021 took place on the evening of December 4 in Thailand, with more than 60 contestants from various countries and territories competing. Nguyen Thuc Thuy Tien’s outstanding performance made the country’s beauty fan community erupt. She became one of the beauties predicted to compete for the title of Miss Grand International this year.

Before embarking on her journey to compete in Miss Grand International 2021, Thuy Tien told Dan Viet, “I will try 1000 percent of my strength in the coming time.”

Despite suffering from food poisoning just before the bikini competition on October 21, the Vietnamese representative remained competitive. She was among the top five women voted “Best in Swimsuit” by the audience, along with representatives from Cambodia, Indonesia, Guatemala, and the Philippines.

Thuy Tien was facilitated by the Organizing Committee to take a special photo set at Miss Grand International 2021 after receiving the most votes from the following audience in the Swimsuit Show at this year’s contest. The Vietnamese representative flaunted his physical prowess and appealing charisma. After only a half-day of posting, this series of photos has received nearly 50,000 likes on the contest’s fan page.

Thuy Tien confidently wears the “Blue Angel” outfit during the national costume competition for Miss Grand International 2021. Despite the fact that a wing unexpectedly collapsed during the performance, Thuy Tien remained composed. She finished her performance in front of the competition judges and a large audience with a bright smile.