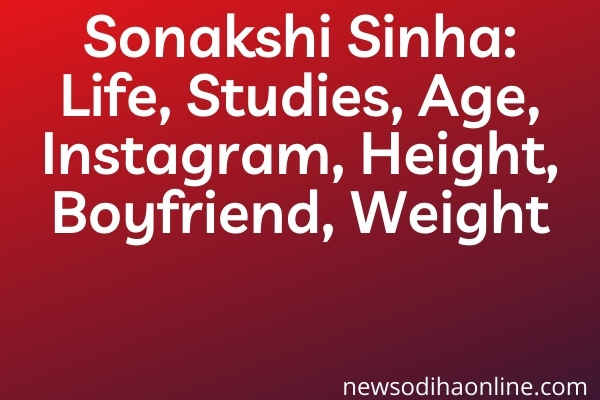 Sonakshi Sinha is one of the leading Bollywood actresses. She is one of Bollywood’s most prominent actresses of the current generation. Her acting career began with superstar Salman Khan in the movie Dabang in 2010.

She had to lose a lot of weight before she could appear in movies. Sonakshi was a foodie and that is why she gained a few kilos in her childhood.

Sonakshi was born in the Indian city of Patna (Capital of Bihar) on 2nd June 1987. Her father, Shatrughan Sinha, is a well-known personality in Bollywood who started his career as a villain but later shifted to lead actor. Sinha started his career with Dev Anand’s Prem Pujari, in which he played the character of a Pakistani Army Man.

Apart from being an actor, his father is also an active politician in Indian politics who started his political career in BJP but in 2019 moved to Indian Nation Congress.

Her mother, Poonam Sinha, is a Sindhi who appeared in movies in the 70s, and she was last seen in the movie Jodha Akbar as Hritik Roshan’s (Akbar Badshah) mother. She is also into politics and contested election from the Samajwadi Party. She has two brothers named Luv and Kussh Sinha, who are twins and four years older than Sonakshi Sinha.

His brother Luv Sinha has also done movies Sadiyaan in 2010 and J.P Dutta directed Paltan in 2018. He is also into politics and an active member of the Indian National Congress.

Kussh Sinha is more into the direction and directs TV serials and ads. Kussh Sinha got married in January 2015.

Also Read – How Nardis Dutt was a half Brahmin by Birth

Sonakshi began her career as a costume designer in the movie Mera Dil Leke Dekho which was produced by her mother Poonam Sinha.

She started her acting career with the movie ‘Dabangg,’ in which she shared the screen with Salman Khan. Sonakshi Sinha’s performance in the film was well-received by all and earned her the Filmfare Award for Best Debutant Actress. The movie collected 138 crores in India and 221 crores worldwide. She has appeared in many hit movies and has carved out a distinct identity in Bollywood. She had also appeared in Tamil movie Lingaa opposite superstar Rajnikanth in 2014.

How much does Sonakshi Sinha weight?

Currently her weight is 70 Kg.

No, she is definitely not adopted.

Yes, She is single right now as per news.

What Sonakshi Sinha eats in a day?

After entering Bollywood she has became very health conscious and follows her strict diet.

Who is father of Sonakshi Sinha?

Her father is Satrughan Sinha, a Bollywood star and now a politician.