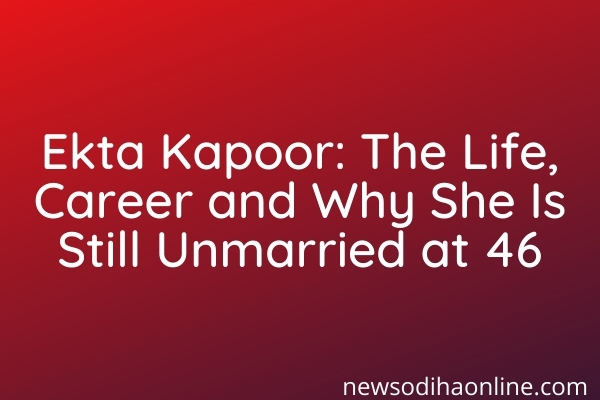 Today marks the 46th birthday of Ekta Kapoor, dubbed the “TV Queen.” Jeetendra and Shobha Kapoor’s daughter has made a name for herself on the small screen as well as in Bollywood. Ekta is a well-known director, screenwriter, and producer.

Ekta was born on 7th June 1975 in Mumbai. She also has a younger broth Tushar Kapoor who is a Bollywood actor who made his debut in 2001.

Balaji Telefilms also has Ekta and Shobha Kapoor as partners. At the same time, Ekta began producing TV serials after receiving financial assistance from her father. Ekta began her career at the age of 19.

Today, on the occasion of Ekta Kapoor’s birthday, we’d like to share some special facts about her.

Many artists consider Ekta Kapoor to be their God Mother. From Sushant Singh Rajput to Vidya Balan was given a break by Ekta. Many actors and actresses who have appeared in her serials are now making a name for themselves in Bollywood. Not only that, but Ram Kapoor, one of television’s most expensive stars, gained a genuine identity by appearing in Ekta Kapoor’s serial.

Her debut serial was Padosan featuring actors like the late Jatin Kanakia which was telecasted on Door Darshan but her first major hit was Hum Panch featuring Ashok Saraf, Soma Anand, and Priya Tendulkar, Vandana Pathak, Vidya Balan (made her debut).

Then she had some quiet years though she produced quite many serials in the time the next big thing came in the year 2000 when her 2 daily soaps Kyunki Saas Bhi Kabhi Bahu Thi and Kahani Ghar Ghar ki broke all records of TRP.

The 5 feet 4 inches tall Ekta Kapoor grew in stature after these two serials. And the biggest find of her career may be Smriti Irani, who became a household name then and later joined politics. She is an MP and minister now.

Ekta manages the company alongside her mother, Shobha Kapoor. Ekta has created approximately 40 TV serials to date. Ekta also made her Bollywood debut in ‘Kyunki Main Jhooth Nahi Bolta.’ Following this, she went on to direct a number of movies. ‘Shootout at Lokhandwala,’ ‘Once Upon a Time in Mumbai,’ ‘The Dirty Picture,’ ‘Ragini MMS,’ ‘Shor in the City,’ and ‘Kya Kool Hain Hum’ are some of Ekta’s hit movies.

Ekta Kapoor has also directed a number of movies featuring her brother, actor Tushar to help him gain popularity. But, more than Tushar, Ekta has made a name for herself in Bollywood.

Many artists have gained recognition from house to house as a result of his TV serials. Ekta was named one of Asia Week Magazine’s “Most Powerful Communicators.” For her achievements, Ekta Kapoor has received the Indian Television Academy Award, Indian Telly Awards, Artist Award, and Asian Television Award.

Ekta Kapoor has given a chance to many new faces and she has also had a rift with some stars.

In 2007, Smriti left the serial Kyunki Saas Bhi Kabhi Bahu Thi due to a rift with Smriti Irani. Then Ekta cast Gautami Kapoor in the role of Smriti, but after leaving the serial of Smriti Irani, the TRP was affected a lot. In 2008, both of them came back again in the serial, removing their estrangement.

Ronit Roy who started his career with Hindi films but got a taste of success on the small screen. Ekta Kapoor gave Ronit a chance in her two most popular shows Kasautii Zindagii Kay and Kyunki Saas Bhi Kabhi Bahu Thi, due to which Ronit became a household name. But later there was a lot of estrangement between the two about something, but both of them showed maturity and resolved this estrangement through mutual talks.

After Rajeev Khandelwal, if Ekta Kapoor has had the biggest fight with anyone, then it is Pulkit Samrat. The fight grew so much that Pulkit had filed a case against Ekta Kapoor and her production house Balaji Telefilms in the court over non-payment and also Ekta not letting him work anywhere else.

When Netflix came to India and got a lot of success from it, many Indian production houses also tried to establish their foot in the OTT platform. All this includes Ekta Kapoor who launched her OTT platform in the name of Alt Balaji in April 2017. Many popular web series have been released on Alt Balaji. And Alt Balaji is counted among the 5 best OTT platforms present in India.

We have told about some of the best web series of Alt Balaji in our old post. And if you have not seen this web series then definitely check it once.

Ekta Kapoor, despite her successful career, is still unmarried. While discussing this, Ekta once stated that she is not married yet due to her father’s condition. Otherwise, she wished to marry and settle down at the age of 22. ‘When I was 17 years old, my father told me that I should either get married or work instead of partying,’ Ekta Kapoor said. He said he wouldn’t give me anything other than pocket money. So I began working in an advertising agency to make money.

‘I was feeling better seeing the situation that was there and thought that my life would be fine,’ Ekta Kapoor continues. “I planned to marry at the age of 22 and have a happy life. But, unfortunately, or fortunately, no matter what we think, it never happens. I decided to film a pilot for a show called Hum Paanch, which I then sold to Zee-TV. When it first aired, I was 19 years old. When the show became popular, everything in my life changed” she said.

Ekta Kapoor became a mother through surrogacy in 2019. Ravi Kapoor, Ekta Kapoor’s son, was named after her father.

Another interesting fact about Ekta Kapoor is that she has a strong belief in Astrology and Numerology. Some astrologer advised her to wear black clothes, and she has been seen wearing them ever since.

Due to astrological suggestions, the majority of Ekta’s films and serials begin with the letter ‘K.’

In 2021 Ekta’s net worth is $13 Million or 100 crore Rupees. Her monthly salary and other income is more than 1 crore Rupees.