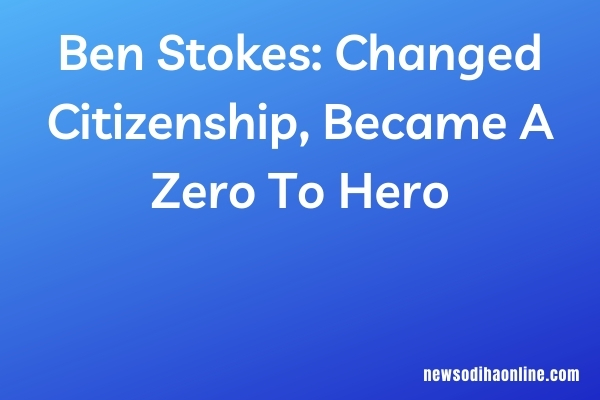 He was originally a New Zealand citizen, but Ben Stokes and his parents moved to England when Stokes was about 12 yrs old.

Often referred to by his pet name Stokesy, he is married to an English woman Clare Ratcliffe, and the couple has one son and a daughter.

Many in England describes him as the worthy successor of Sir Ian Botham. Ben Stokes has already included his name in the bracket where all-rounders like Sir Garfield Sobers, Sir Ian Botham, Sir Richard Hadlee, Imran Khan, Kapil Dev, Jaques Kallis and Shane Watson are present.

The 6 feet 1-inch tall dangerous all-rounder, who made his England debut in 2011, struggled in his first two years. In his first ODI against Ireland, Stokes just managed to score 3 runs from 11 deliveries he faced.

In his first T20I match against West Indies Stokes neither got a chance to bowl nor to bat.

In the Perth Test of the 2013 Ashes series, he got his first chance to show off his skills. Stokes scored 120 runs from 195 deliveries in the fourth innings of his Test career while batting at number six in Perth. Though England lost the test by 150 runs, Stokes did not look back after that splendid innings. Stokes is known to be just as irritable off the field as he is on it.

Ben Stokes was a topic of discussion after joining the England team due to his misbehaviour in the first few years. In addition, Stokes has been arrested twice in the last ten years. Stokes was arrested in 2012 and later released with a warning by police. He was excluded from the England Lions tour in 2013 after being caught drinking late at night.

After fracturing his wrist in 2014 because of punching in the locker after he got out at a duck, his teammates started calling him Rocky and to make more fun of that incident, they also used to call him The Hurt Locker.

Ben Stokes’ behaviour also had an impact on his cricket career. Ben Stokes was only able to score one century in his first four years. The T20 World Cup in 2016 was like a nightmare for Ben Stokes. The Caribbean team was attempting to score 156 runs to win the T20I world cup.

With only four wickets in hand, West Indies needed 19 runs in the final over to win. At the crease, Carlos Brathwaite and Marlon Samuels were present. Ben Stokes came on to bowl the final over, and Brathwaite gave his team the title by hitting four consecutive sixes on the first four balls of his over.

As a Batsman and the fight

However, in 2016, Stokes began to dominate as a batsman. He scored 904 runs in 12 Test matches this year, including two centuries. He also scored 470 runs in 13 One-Day Internationals, including a century and four half-centuries. The following year, on September 25, 2017, there was news that Stokes had been arrested outside a nightclub.

Ben Stokes was seen in a viral video brutally beating four to five people. The England and Wales Cricket Board suspended him (ECB). Alex Hales, who was with Stokes at the time of the incident, was suspended as well.

After being suspended, he was unable to play in the 2017-18 Ashes series. When Ben Stokes’ name was brought to light after this incident, it was for good reason.

Though Ben Stokes made his international debut in 2011 but it took 6 years for him to debut in the biggest T20 league in the world.

In 2017, Ben Stokes became the highest-paid overseas player in the IPL auction as Rising Pune Supergiants bought him at INR 14.5Cr ($2.16 million). He is currently associated with the Rajasthan Royals. Stokes was purchased by the Royals in the 2018 IPL auction for Rs 12.5 crore as the RPS team was dissolved.

During the 2019 Ashes series, Ben Stokes emerged as England’s most trusted player. England made history by defeating Australia in the third Test by one wicket, thanks to Stokes’ unbeaten century (135). England met their target of 359 runs despite losing to Australia.

In his innings, he hit 11 fours and eight sixes and snatched the victory from the Kangaroos.

He finally succumbed to cramps, but he did not give up. When England only had one wicket left, this all-rounder went on a tear, hitting fours and sixes. The last batsman Jack Leach stood by him and remained on the wicket. Stokes and Leach combined for 76 runs for the final wicket, with Leach contributing only one run.