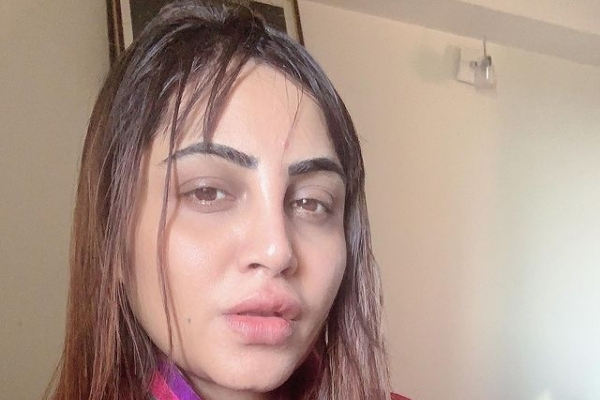 There’s bad news for Bigg Boss fame TV artist Arshi Khan’s fans. On Monday, Arshi was severely injured in a car accident in Delhi’s Malviya Nagar neighbourhood. She has been taken to a hospital in Delhi. The police are currently investigating the incident.

Arshi Khan is currently receiving wrestling instruction from the legendary wrestler The Great Khali. She frequently posts training videos to her Instagram account, and Arshi Khan has previously posted a video of herself dancing with Khali.

Contents hide
1 Respond to trolls about being referred to as a Pakistani
2 Arshi Khan was born.
3 She began her modelling career.
4 The ‘Pune-Goa’ case
5 Told that Afridi was her boyfriend
6 She slapped a director
7 Radhe Maa was accused of assaulting her

Respond to trolls about being referred to as a Pakistani

Trolls are always on the lookout for Arshi. When she was trolled for citizenship in the past, she gave a strong response. He stated unequivocally that I am Indian and that I possess all of the identity cards issued by the Government of India.

In an interview, she stated that I was trolled by targeting unnecessarily. As a result, my work suffered as well. My work is being harmed because I am thought to be a Pakistani citizen living in India.

Read- Is Priyanka Chopra’s removal of husband Nick Jonas’s surname a sign of divorce after three years of marriage?

Arshi Khan was born on November 28th, 1989. Arshi, who was born in Afghanistan, moved to India with her family when she was four years old and began living in Bhopal. He received his primary and secondary education in Bhopal. Arshi had always wanted to be an actress, so she relocated from Bhopal to Mumbai to pursue her dream.

She began her modelling career.

Arshi Khan began her modelling career. After that, he went into acting. She made her acting debut in ‘The Last Impera,’ Bollywood’s first 4D historical film. Arshi Khan has appeared in some Tamil films in addition to his work in Bollywood. Arshi Khan has competed in numerous beauty pageants in addition to modeling and acting. She has previously held the titles of Miss Maharashtra Global Tourism and Miss Glory Earth 2014.

Arshi has always been embroiled in a slew of controversies. There are more controversies associated with him than the number of films he did not work on, and one of them is the ‘Pune-Goa’ controversy. Arshi Khan was arrested in October 2016 by the Pune Police for her involvement in a sex racket. Arshi was apprehended during a hotel raid, according to police.

In this case, a man named Vipul Dahal was also apprehended. Dahal, according to the police, was an agent for Arshi. Arshi, on the other hand, claims that the police raided the hotel room where she was staying. When the police did not find anything during the raid, they approached them and demanded money.

But when Arshi refused to give him the money, this false case was filed against him. When he refused to pay, the cops ensnared him in this swindle. Arshi’s name was associated with a similar racket in Goa after Pune.

Told that Afridi was her boyfriend

Arshi was also said to have spent a vacation in Dubai with former Pakistan cricketer Shahid Afridi. Arshi had stated incorrectly that she frequently travels to Dubai to see friends and family, but she had never met Afridi. Although he admitted to being in a relationship with Afridi in a tweet, he later denied this claim.

She slapped a director

Arshi Khan was embroiled in another controversy in March 2015 when she slapped a Bhojpuri filmmaker for misbehaving with her. Arshi Khan told the media that producer Harish Pratap Singh slapped her after attempting to touch her twice during a party.

Radhe Maa was accused of assaulting her

Arshi had filed a police report after receiving threatening phone calls from Radhe Maa, who was said to be a sanyasini. He accused Radhe Maa of operating a section racket. Arshi told the cops that Radhe Maa and her agent are pressuring them to join the racket. Following that, news of an attack on him became public.