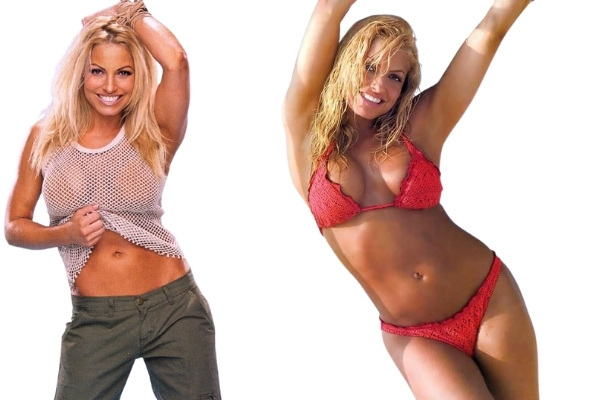 Trish Stratus has a complex personality. She is a former professional wrestler with WWE (World Wrestling Entertainment), formerly known as the WWF (World Wrestling Federation). Arguably Trish is one of the most popular female superstars to appear in WWE or WWF. Her contemporaries like Torrie Wilson, Stacy Keibler, and Sable were quite famous but nobody matched her popularity.

Trish was part of many sexually themed storylines but the Canadian professional wrestler overcame all the hurdles to shine like a queen.

She is also a fitness model and fitness instructor, Yoga instructor, actress, and television personality. She was a three-time WWE Babe of the Year and a WWE Hardcore Champion during her illustrious wrestling career.

In Trish Straus biography we will try to cover everything starting from her childhood to World Wrestling Federation days to her present life. Trish was involved romantically with Vince McMahon and had some ugly fight with his daughter Stephanie McMahon.

Trish Stratus began her working life as a receptionist at a local gym. She was spotted by the MUSCLEMAG editor there and later appeared on the cover of the magazine’s May 1998 issue.

Stratus continued to work on her body and was featured in several other magazines. WWF took a look at her modelling work and then signed a multi-year contract with the company in 1999. Ron Hutchinson, of the WWF, was assigned to train her at Sully’s gym.

Stratus started her career as a valet accompanying Test and Albert.

Stratus made her official WWE ring debut on the June 22 episode of Smackdown, where she won the tag team title with the T&A team against Hardy Boyz and Lita. Stratus and Lita got into a fight after the game.

With the assistance of Stephanie McMahon, Stratus made the winning mark with Lita on the July 24 issue of RAW. Despite competing for the WWF women’s championship on multiple occasions, she never won. She also left the T&A (Test & Albert) team at the end of the year after the team disbanded. Later in her career, she won the WWF women’s championship for the first time in 2002 in a six-pack challenge between survivors.

On May 6, 2002, Stratus also won the WWE Hardcore Championship. She is the only woman in WWE history to have won the women’s championship seven times. She retired from professional wrestling after her victory on September 17, 2006. She was also named ‘WWE Babe of the Year’ three times and ‘Diva of the Decade’. Trish was also a ‘WWE Strong Enough’ coach who was inducted into the ‘WWE Hall of Fame’ in 2013.

Trish was romantically involved with WWF chairman Vince McMahon and even they kissed Infront of Vince’s wife Linda. Trish had multiple affairs on WWE starting from Vince to Rock. the diva got involved in relationship with Chris Jericho.

Christian and Chris Jericho were friends in 2003, and around the same time, Chris Jericho started dating Trish Stratus, while Christian was dating Lita. It was all a ruse, and Trish Stratus overheard Jericho talking to Christian in which they bet on who could sleep with their respective partner first.

While Stratus overheard this, the story progressed and led to an intergender tag team match dubbed “The battle of the sexes” at Armageddon 2003, in which Stratus and Lita were defeated. Eventually, Jericho and Stratus’ relationship would last into 2004, and there was even a time when Christian faced and defeated Stratus, setting up the Jericho-Christian match at WrestleMania XX.

Trish Stratus net worth and Earnings

Trish Stratus has amassed a sizable net worth as a result of her various jobs, which, according to celebrity net worth estimates, is around $ 6 million in 2019. She has also appeared in a number of films and television shows.

Trish Stratus is married Ron Fisico, her high school boyfriend that continued for fourteen years before both tieing the knot on September 30, 2006, in a private ceremony in Toronto, Ontario, Canada. Her wedding was attended by a small number of her family, friends, and special guests.

Ron Fisico is also from Canada and attended the same school as Trish and he is also into bodybuilding.

Trish and her husband Ron are blessed with two children. On September 30, 2013, she gave birth to her first child, Maximo Fisico. Stratus announced her second pregnancy on Twitter in October 2016. The powerful couple welcomed their second child, a girl, on January 14, 2017. Madison-Patricia Fisico is a Toronto-based designer.

Aside from her professional life, Trish Stratus became the focus of attention due to a number of controversies involving her personal life. She was involved in sex stories early in her career while running T&A and was also involved in the Vince Mc Mahon affair.

She had an on-screen relationship with Jeff Hardy and an affair with Chris Jericho.

Stratus is also quite popular on social media, with 2 million followers on Instagram and 1.2M Followers on Twitter as of May 2022.

Trish Stratus has also been involved with numerous charities such as Ronald McDonald House, Dreams Take Flight, and the Special Olympics.

Trish was active in professional wrestling for only six years however she made several guest appearances even after her retirement.

Trish is currently on the judging panel for Canada’s Got Talent 2022 along with Howie Mandel, Lilly Singh, Kardinal Offishal.