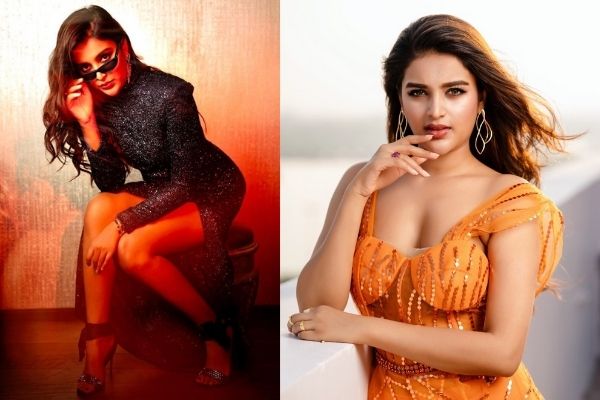 Nidhhi Agerwal is trending on social media as her fans tweet with the hashtag #NationalCrushNidhhi. So let’s learn Who is Nidhi Agerwal and about her career, age, height, net worth, boyfriend, and others.

Nidhhi Agerwal was born on 17 August 1993 and is a Telugu and Tamil-language film actress, gymnast, and dancer. She made her acting debut in the 2017 Hindi film Munna Michael. She was a finalist in the Yamaha Fascino Miss Diva 2014 competition.

Savyasachi (2018) was her Telugu debut, and Eeswaran (2018) was her Tamil debut (2021). She is quite popular on social media and has 13 million followers on Instagram while on Twitter she has 703K Followers.

Contents hide
1 What is the mother tongue of Nidhi Agarwal?
2 Nidhhi Agerwal Details

What is the mother tongue of Nidhi Agarwal?

Agerwal grew raised in Bangalore after being born in Hyderabad. She was born into a Hindi-speaking Marwari family and is fluent in Telugu, Tamil, and Kannada. So her mother tongue is Hindi.

Her education was completed at Vidyashilp Academy and Vidya Niketan School. She graduated from Christ University in Bengaluru with a degree in Business Management. She has extensive training in ballet, kathak, and belly dance.

Sabbir Khan, the director, stated in 2016 that Agarwal had been cast as the lead in his film Munna Michael, with Tiger Shroff. She was chosen from a pool of 300 applicants.

She expressed her interest in acting by saying, “I’ve always wanted to be a movie star. Every time I saw Aishwarya Rai on a billboard, I told myself that one day my face would be up there as well.” Nidhhi was also asked to sign a no-dating agreement until the film was completed.

Nidhi Agerwal will be seen next in the Telugu movie Hari Hara Veera Mallu which will be released in April 2022. The movie also stars Pavan Kalyan, Arjun Rampal and Nargis Fakhri. The movie will also release in Hindi, Tamil and Malayalam.