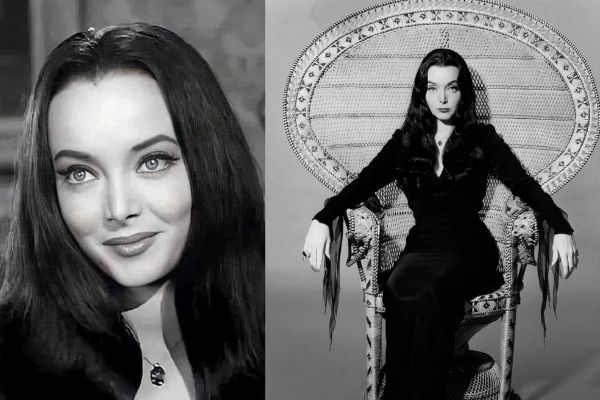 After studying in California at the Pasadena Playhouse, Carolyn Jones made her debut as a stage actress, appearing in the early 1950s in episodes of television series until her brief film debut in the film “A Man Accuses” (1952), a film noir. Directed by William Dieterle.

Later Carolyn Jones could be seen alongside Bing Crosby, Bob Hope, and Dorothy Lamour in “Road to Bali” (1952), along with Vincent Price in “The Crimes Of The Wax Museum” (1953) by André de Toth, or in ” The Bribed ”(1953), a noir film directed by Fritz Lang starring Glenn Ford.

Read- Indira Varma: The Journey from Kamasutra To Mission Impossible 7

At the same time that she was playing her first roles on the big screen, Carolyn Jones continued her television path that finally led to popularity in the 1960s, when in 1964 she played Morticia Adams in the series “The Adams Family.” (1964-1966).
A decade earlier, in 1953, Carolyn had married the famous television producer Aaron Spelling (born 1923), whom she divorced in 1965.

In the 50s, generally in secondary characters, she was also part of the cast of cinematographic films such as “Desirée” (1954), Henry Koster’s film about Napoleon that starred Marlon Brando.

“The Temptation Lives Above” (1955), a famous comedy directed by Billy Wilder with Marilyn Monroe as the main actress.

“The Bachelor and Love” (1955), a romantic comedy by Charles Walters that co-starred Frank Sinatra and Debbie Reynolds.

“Invasion of the Body Thieves” (1956), a science fiction by Don Siegel that adapted a novel by Jack Finney.

“The Man Who Knew Too Much” (1956), an intriguing film directed by Alfred Hitchcock.

“The Last Train From Gun Hill” (1959), western by John Sturges, or “Millionaire Of Illusions” (1959), a title directed by Frank Capra that Carolyn co-starred with Sinatra, Edward G. Robinson, and Eleanor Parker.

In the 60s, and as a result of her success with the television broadcast of the aforementioned series “The Addams Family”, Carolyn was moving away from the cinema.

She had previously appeared in “The Conquest Of The West” (1961) starring in an episode directed by Henry Hathaway.

Following her divorce from Spelling, she had an affair with Bud Moss before remarrying, in 1968, to second unit director Herbert S. Greene (born 1921).
The couple divorced in 1977.

Her career as an actress in the 70s and 80s was scarce, taking part in “Roots” (1977), a famous television series that starred LeVar Burton, and in episodes of other television series, including “Little Ladies of the Night”.

In the early 1980s, she was diagnosed with colon cancer, passing away in West Hollywood on August 3, 1983.

She was 53 years old and widowed her last husband, Peter Bailey-Britton, whom she had married in 1982. She had no children.