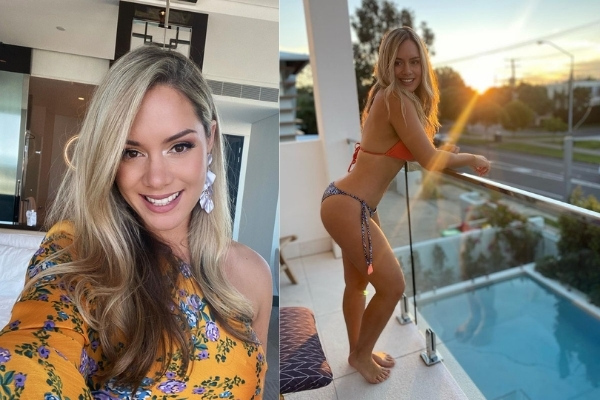 Reigan Derry, the Western Australian singer, took to Instagram yesterday to accuse Melbourne producer Jolyon Petch of failing to credit her for her vocal talents on his ARIA-nominated song, ‘Dreams.’

She wrote sharing her last year image from Aria “This picture is not from this years ARIA red carpet. Even though I am singing on a song nominated for an ARIA award this year (Dreams by @jolyonpetch in the best dance category), I was not invited to attend, as @aria_official doesn’t know I am the singer on the track.”

She further wrote “Sitting at home watching the Aria awards. It’s such a weird feeling cos I should be so excited and proud, but I feel so invisible and powerless. I’ve been told not to talk about this, but I’m honestly so upset about it. I really want to share what’s happened. The song “Dreams” by Jolyon retch is sung by me and was recorded by me. What you hear on the track is what I recorded in the very room I am in right now. I should be celebrating my only ARIA nomination in my whole life of singing, except the “artist” Jolyon retch refuses to credit me.

My name isn’t on “Dreams” and I have been reluctant and scared to talk about it because I have felt embarrassed and been exhausted by the whole situation. The last few months have been some of the most painful, consuming, and expensive months of my life. Right now, Instead of celebrating being a platinum selling, ARIA nominated artist, I have been silenced, bullied, insulted, and belittled.

Jolyon Petch released “Dreams” without my consent and without written agreement. When I first flagged this I thought it was a simple misunderstanding and I never could have imagined what was to follow. It has now been more than 2 months since I asked Jolyon to acknowledge me and credit me on a song that is solely sung by me.

Since that day, to going gold, then platinum, then ARIA nominated Jolyon has chosen not to acknowledge me in all social media posts, radio interviews and press. I, Reigan Derry am the vocalist behind “Dreams.; and I am being silenced.

For context, my exact message to Jolyon was “could you please tag rne in your post I want to share this with you! My whole network is excited for rne being on this track ,c2 It’s the biggest thing that’s happened to me too x”

Instead of being open to a mature and professional dialogue, following my sending of that message, Jolyon pen didn’t tag rne, and went on to block and delete me from all social media accounts. In fact, he has gone so far as to block and delete any comments that mention my name. It appears anyone showing their support or excitement for my being the vocalist behind “Dreams” are being blocked.

Jolyon Petch will thank the record company and his fans in every single social media post, yet he still chooses to keep me unnamed. Because the track doesn’t have my name featured, I was relying heavily on Jolyon to mention me as the singer and at no time did I think I would have to fight for this.

I recorded “Dreams” at my home studio at my dad’s house in Perth where I have slowly pieced together approximately $10,000 worth of equipment. I went to aft to learn how to produce my own vocals professionally and have been working remotely as a session singer for the last 3 years. When working on collaborations, rny invoices for vocals mention that the fee is for DEMO vocal only, and if the vocal is to be released, a separate agreement will have to be drawn and agreed upon. I have invoiced for more than 20 sessions this year alone. (Big brother, DWTS, channel 9, Toyota) I’ve also signed just as many performer releases and agreement contracts. “

Read- Madonna, 63, gives a heart attack to her fans as a result of her lingerie PHOTOS.

Who is Reigan Derry

Reigan Elisse Derry, also known as Reigan Derry (sometimes referred as only Reigan) is an Australian singer-songwriter who was born on September 19, 1988. Derry rose to prominence in 2006 after finishing eleventh on the fourth season of Australian Idol. The following year, she joined the Australian pop duo Scarlett Belle, which broke up in 2011.

Derry finished fourth on The X Factor Australia’s sixth season three years later. She subsequently signed with Sony Music Australia and released her expanded debut, All of the Pieces, in December 2014. Reigan is currently employed as a club singer for various agencies in Sydney and the Gold Coast.

Reigan Elisse Derry was born in Maida Vale, Western Australia on September 19, 1988. Derry began singing at a young age and began classical lessons when he was fourteen. She attended Perth Modern School, where she earned a music scholarship and specialized in voice.

Derry had already performed with the Western Australian Symphony Orchestra and as an understudy in the musical The King and I at the Regal Theater during her high school years. She was also a member of the Christian group Djreamz. Derry worked as a receptionist before joining Australian Idol. Reigan’s ancestors are Anglo-Burmese.