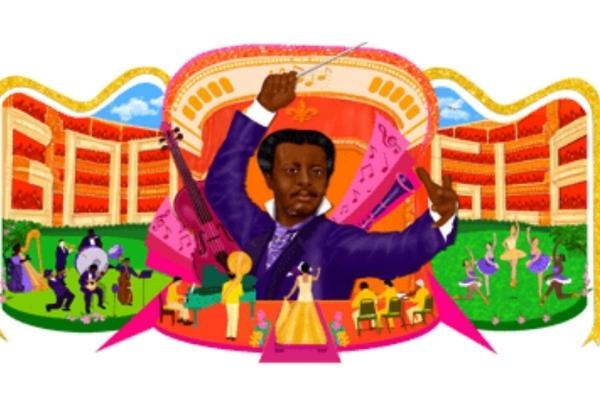 This Saturday, November 20, the doodle honours classical musician and Creole composer Edmond Dédé. Google has just adorned its home page with a new doodle, as is customary when highlighting a famous person or a historical milestone.

Lyne Lucien, an American Illustration Award-winning Haitian artist based in Brooklyn (New York), illustrated the doodle, which features Edmond Dédé as the conductor of his composition “Mon Pauvre Coeur” (1851), one of the oldest pieces of music by a Black Creole composer from New Orleans.

Dédé was born on November 20, 1827, in New Orleans, Louisiana, USA, and learned the clarinet from his father, who was the conductor of a local military band. He then switched to the violin, which quickly became Dédé’s instrument of choice as she blossomed into a musical prodigy.

Edmond Dédé left his country for Mexico after apprenticing with prominent New Orleans musicians in order to escape growing racial prejudice in the American South.

In 1851, he returned home and published “Mon Pauvre Coeur.” He worked briefly to save money before returning to France to continue his classical studies. He landed a job at the Grand Théâtre de Bordeaux in the late 1850s, where his creativity flourished. In addition, he performs at the Alcazar Theater and the Folies Bordelaises.

His ballets, operettas, overtures, and more than 250 songs were huge successes in France, but he received little recognition in the United States. Dédé lost his favourite Cremona violin in a shipwreck on his way to his only musical appearance in New Orleans in 1893, but he found another just in time for his performance!

Edmond Dédé An Inspiration for many musicians

Despite living during a period of severe racial discrimination, Edmond Dédé’s talent propelled him to the ranks of world-class composers. The majority of Edmond Dédé’s scores are housed in the National Library of France as well as several American universities. Its history inspires contemporary classical musicians to be proud of their heritage and to recognize the contributions of musicians from historically marginalized communities.

“For more than 20 years, we have been proud to offer Doodles commemorating the lives of inspiring individuals such as Edmond Dédé, violinist, composer, and conductor at the Grand Théâtre de Bordeaux and the Théâtre de l’Alcazar,” says Isabelle Leung, Director of Communication and Public Affairs at Google France.

“We want to enable all those who use the search engine to (re)discover the well-known and lesser-known personalities who have marked our history through these illustrations and the talent of the artists.”