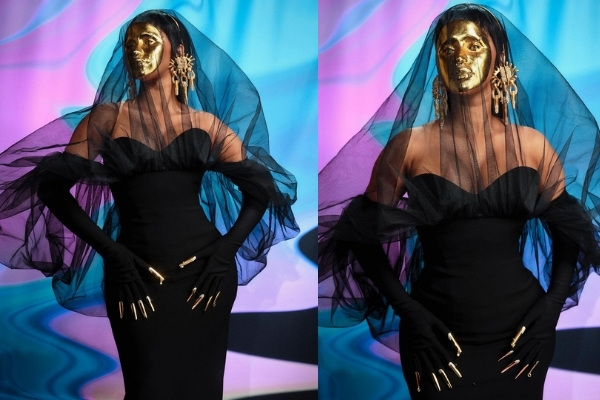 The 2021 American Music Awards, also known as the AMAs, were held on Sunday, November 21, 2021, at the Microsoft Theater in Los Angeles, California, United States. Cardi B hosts this star-studded music award show.

Cardi B’s appearance successfully captured the attention of the public. The I Like It singer was first seen posing in a long black dress with a sequin leopard-print pattern that reached the floor.

Cardi B then changed into a different outfit for the 2021 American Music Awards. Cardi was wearing an off-the-shoulder Schiaparelli gown at the time, and she added drama with a gold mask, gold earrings, and a black veil.

The 29-year-old rapper also revealed details about his preparations for hosting the AMAs in 2021. Cardi spoke with the host of People, who was on the red carpet at the time.

“I only slept for two hours and arrived for rehearsal at 10 a.m. today. We just finished at two o’clock, (I) got dressed, and I’m here to return for my big entrance and (to) host! “He stated.

Cardi B also stated that she cannot wait to return home and be with her children. Cardi gave birth to their first child, Kulture Kiari Cephus, in 2018 and is expecting a son in September 2021.

“I’m going straight home for my baby as soon as I finish this,” Cardi B said.

The rapper went on to say that his two children were sick at the same time last week. Cardi admitted that it had been a difficult and trying time.

“There have been a lot of tears, but they’re both doing well now, and it’s a shame to be here hosting the show and working,” he continued.

Cardi B’s appearance in a gold mask caused quite a stir on social media. Many internet users praised the rapper’s style, which was born in Washington Heights.

“Cardi, you look stunning,” one Twitter user said. “Cardi B has become a fashion icon,” said another netizen. “I thought it was Cardi B at first, I was scared, but I love the dress,” the netizen added.

However, there were some netizens who tweeted in jest. “Cardi B adheres to the mask wearing policy to varying degrees,” one Twitter user wrote.